For Robert Andrew, an artist descended from the Yawuru people, process is the focus of a practice that utilises complex devices to connect with the unknowability of Indigenous culture, history and language. 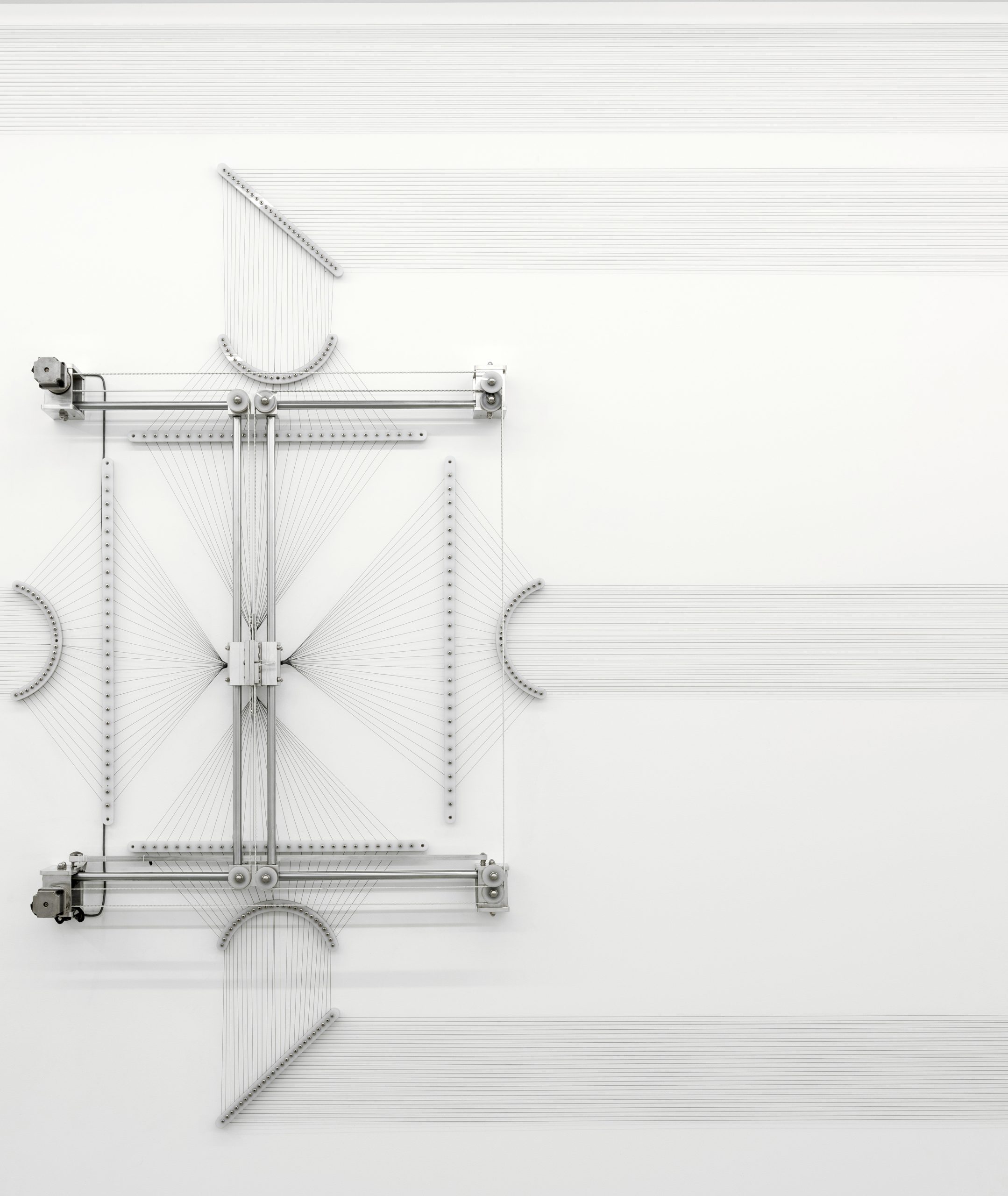 Architects draw. This has been the case since the Renaissance when the role of the architect shifted from master craftsperson to purveyor of schematic drawings. Today, while the most obvious function of drawing is to communicate, the limitlessly versatile process of drawing itself is valuable in developing ideas. One of the great joys for an architect is discovering alternative approaches to drawing, especially those sourced outside the discipline’s boundaries. This is particularly the case for a certain type of drawing practice that puts process itself on display – where the process and what is discovered through that process is more important than the drawn outcome.

When the act of drawing is used as a process of discovery – whether you draw from something, draw with something, draw out something – its emergent capacity can unlock ideas, narratives or meaning for both author and audiences. This emergent potential can be gleaned in much of the work by Brisbane-based artist Robert Andrew. In Tracing Inscriptions (2020), shown in the Overlapping Magisteria exhibition at the Australian Centre for Contemporary Art, it is immediately apparent that visitors are stepping into a drawing process, which unfolds over the course of the exhibition. The installation transforms the gallery space into an immense drawing machine, with floors, walls and ceiling augmented by a carefully designed and installed automated drawing system. The space is filled with the hum of small electrical motors that power a device akin to an XY coordinate pen-plotter. However, in place of a pen, one hundred geometrically arranged strings radiate from the device and span across the gallery, transferring the slow mechanical movements from one side of the room into abstract drawings on the other side.

The drawings are formed by an arrangement of natural objects hung at the end of each string, consisting of a combination of charred timber from bushfire-ravaged landscapes and rocks and shells sourced from the lands Andrew lives on and travels through. These elements are selectively coated with ochres and oxides that leave drawings on the walls and residue on the floor as the black charcoal and coloured pigments rub directly against the surfaces of the gallery. The material quality of this installation is captivating, producing beautifully temporal drawings.

There is a tension created between Robert Andrew’s elaborate devices and the pristine gallery space, a dynamic that is likewise apparent in the contrasting components that make up the drawing machine itself. The clean lines of stainless-steel and plastic gadgetry that are programmed to operate in a highly controlled way are working in opposition to the natural elements found in the landscape, which produce the incidental and imprecise rubbings on the wall. When asked about this relationship, Andrew describes his approach to reconfiguring technology to hold together different ideas. “It’s about setting up this thing that is binary in a way, that is so direct. There is a precision that’s held in machines and the control you can hold over them,” he explains. “When you take that control away, it creates a new space. There is an erosion of logic in the process that needs to be embraced, otherwise it is just a machine.”

This is what drawing machines do best: they put on display dialectical relationships such as the distinction between the rational process of technology and the subjectivity of creativity, or the drawing process and the drawn outcome. In this way, Robert Andrew’s work is connected to a historical lineage of drawing machines, from 18th century automatons such as Jacquet-Droz’s Young Writer (1774), to explorations in modern art such as Jean Tinguely’s Métamatics (1955–59) and Patrick Tresset’s cognitive robot Paul (2016). Somewhat closer to home, there are clear similarities to Cameron Robbins’ Field Lines, which exhibited at MONA in 2016 and showcased drawing machines powered by natural phenomena such as wind, tidal and solar forces.

In all of these works, the relationship between the drawer and the drawing is reframed by the mechanisation of the drawing process. This requires shifting the mode of creative production from making drawings to making machines that make drawings. These machines become a proxy for the artist, operating on their behalf in ways that can either be planned or unplanned. As a result, the machine distances the producer and what is produced. In other words, an artist relinquishes control by removing themselves from the act of drawing through technology that automates a drawing procedure in a way that is not hindered or influenced by more direct drawing methods.

What distinguishes Robert Andrew’s work from this lineage of inventive contemporaries is that his machines appear to bring him closer to his work. Rather than creating distance, they create a more intimate and direct relationship between concepts of self-identity, history and culture. Much of Andrew’s work is autobiographical, exploring his cross-cultural heritage as a descendant of the Yawuru people from the Kimberly Region and the predominate narratives and counter-narratives that he has uncovered while investigating his family’s past. Andrew commonly uses letters from his family archive to inform his work, in some cases directly programming parts of these into his machines as source material to manipulate and abstract into drawings. “I keep coming back to the letters sent to my nana,” reflects Andrew. “They used the English language as a colonising tool and used a mechanism [the printing press] to send information to my grandmother and great-grandmother telling them what to do and what not to do. Controlling them. I’m interested in subverting the colonisers tools that have been overlaid on Indigenous histories and have been used to dominate and have this authority over a lot of people.”

He combines this subject with a way of working with machines that he describes as linking back to his childhood spent pulling things apart and putting them back together. This way of working embodies a process of learning which, for Andrew, becomes a way of producing art as a tool to understand the complexities of Indigenous culture, a knowledge that he recognises is unknowable. Accordingly, he creates machines that themselves make drawings that are scarcely comprehensible.

Each of Andrew’s kinetic artworks can be read as a device that draws meaning from matter through a process that unfolds over time. Throughout many of his installations there is a consistent presence of physical and metaphorical ‘unearthing’, whether it be a machine that unravels string to write upon the ground (Continuing Depths of Connection - ngan-ga, 2021); a machine that slowly excavates large blocks of compressed earth (Presence, 2019); or a machine that coarsely grinds pieces of sandstone against tiles (Moving from the Binary, 2016). In each case, what appears is not only a material process where something is revealed over the duration of a show, but also an invitation for audiences to uncover the meaning within the processes he creates to realise the works.

Rather than presenting a static composition or a finished drawing, Andrew is more interested in developing a process that draws from the way Indigenous language and culture develops over time in ways that are similarly transient, complex, fragile and beautiful.

Originally published in Union 01. For more about the artist subscribe to Union magazine. 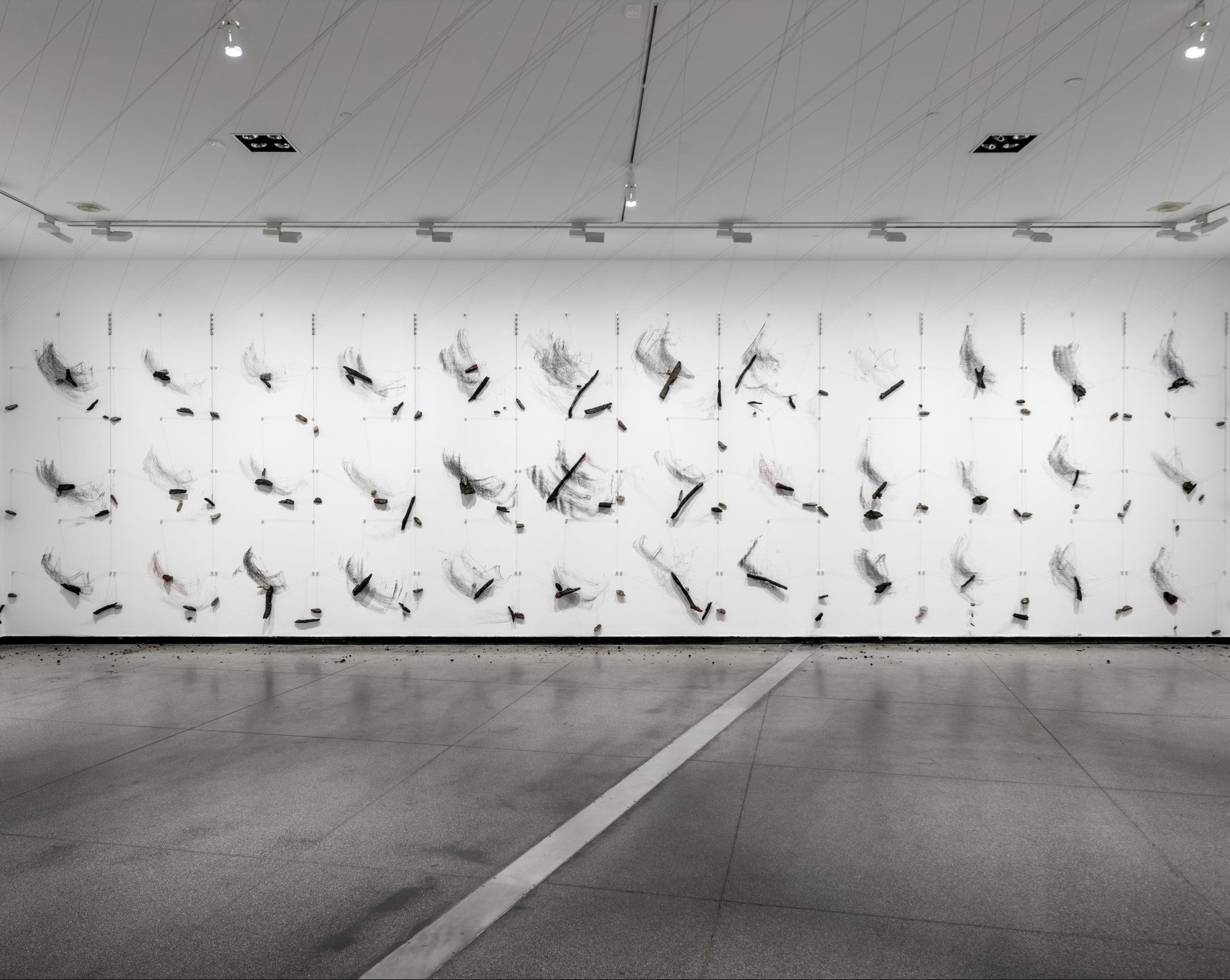 ”This is what drawing machines do best: they put on display dialectical relationships – the distinction between the rational process of technology and the subjectivity of creativity, or the drawing process and the drawn outcome.” 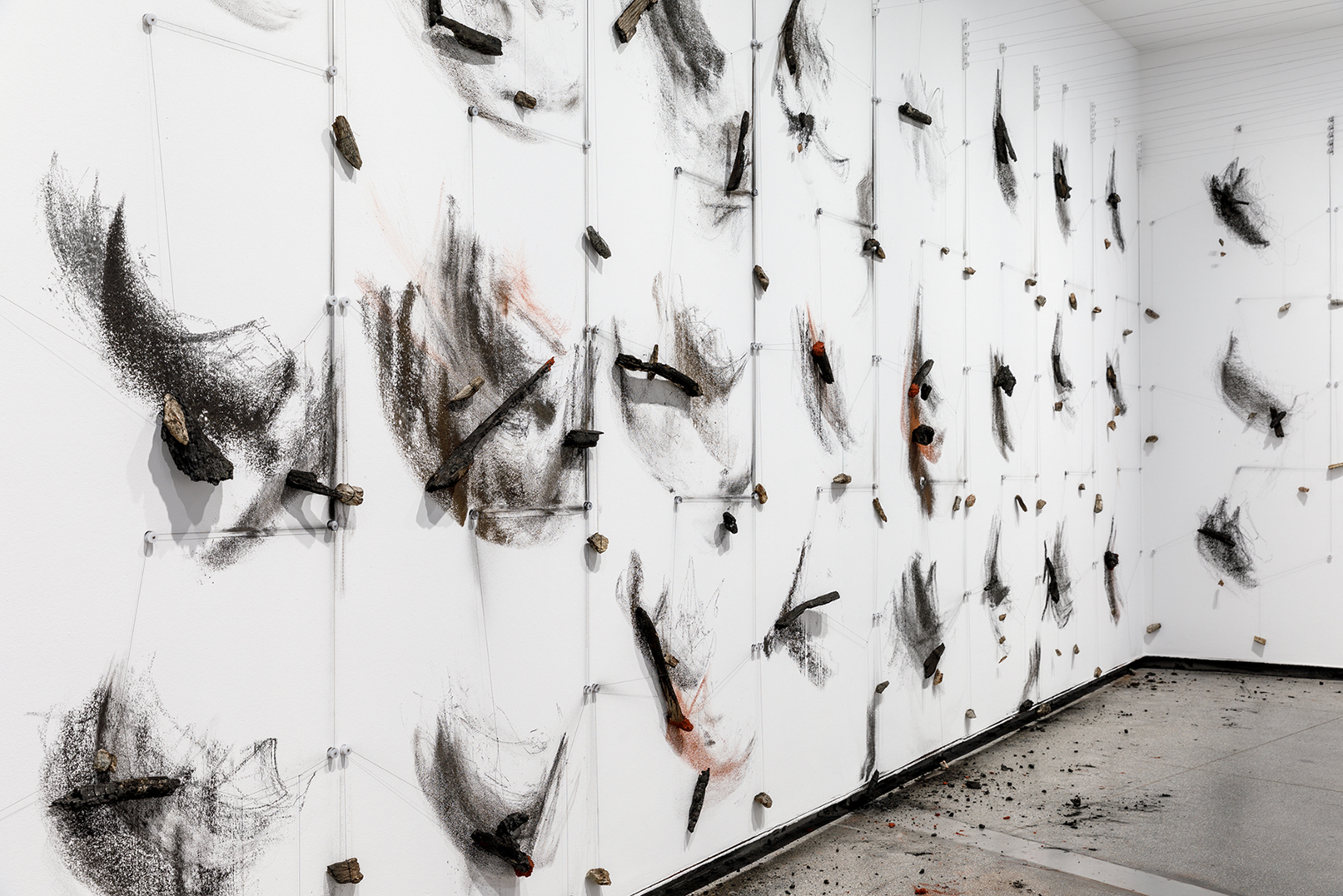 ”This way of working embodies a process of learning which, for Andrew, becomes a way of producing art as a tool to understand the complexities of Indigenous culture, a knowledge that he recognises is unknowable.” 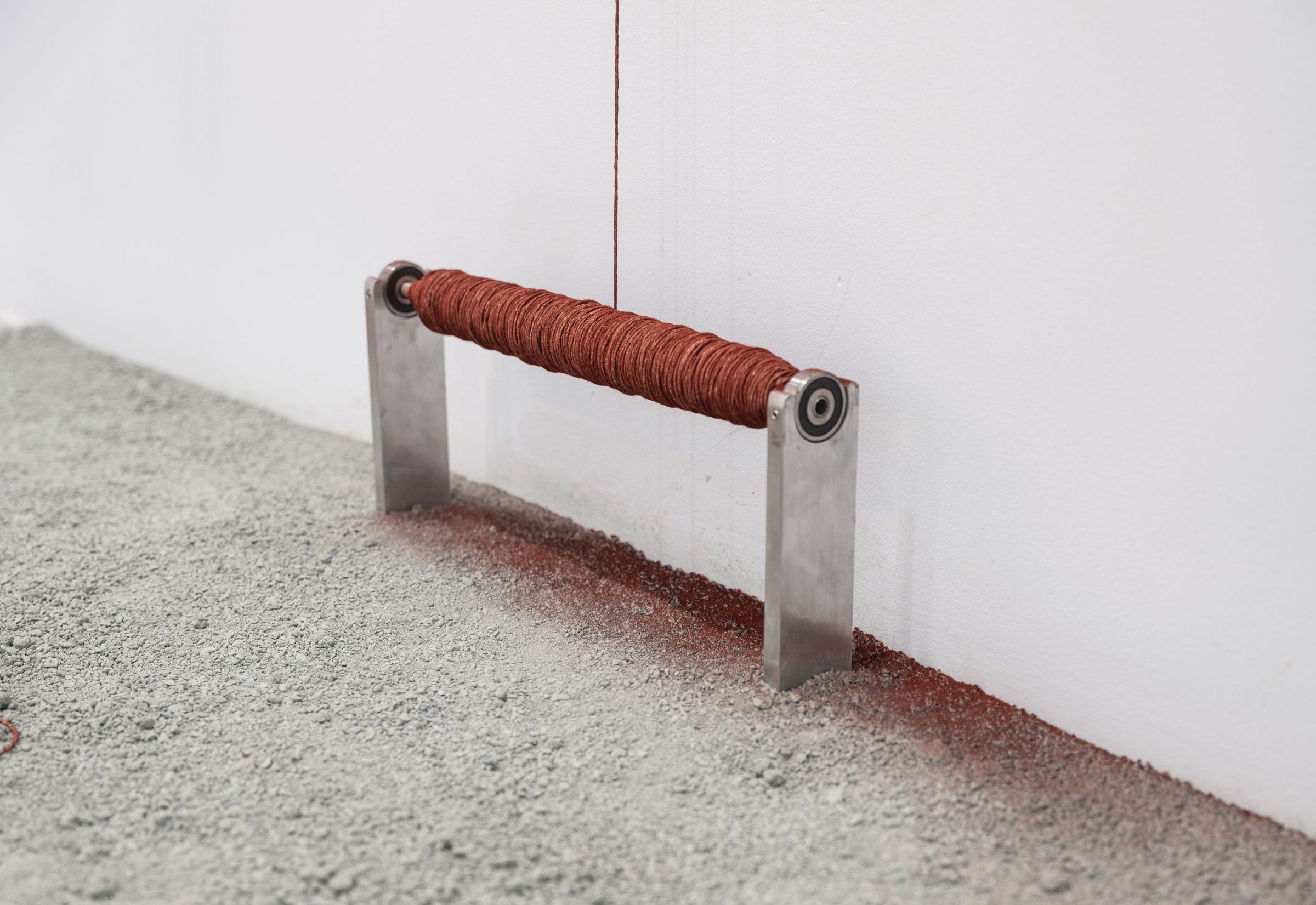