A collaboration between architecture studio Taylor Knights and artist James Carey, the 2021 Architecture Commission cultivates a culture of care and custodianship. 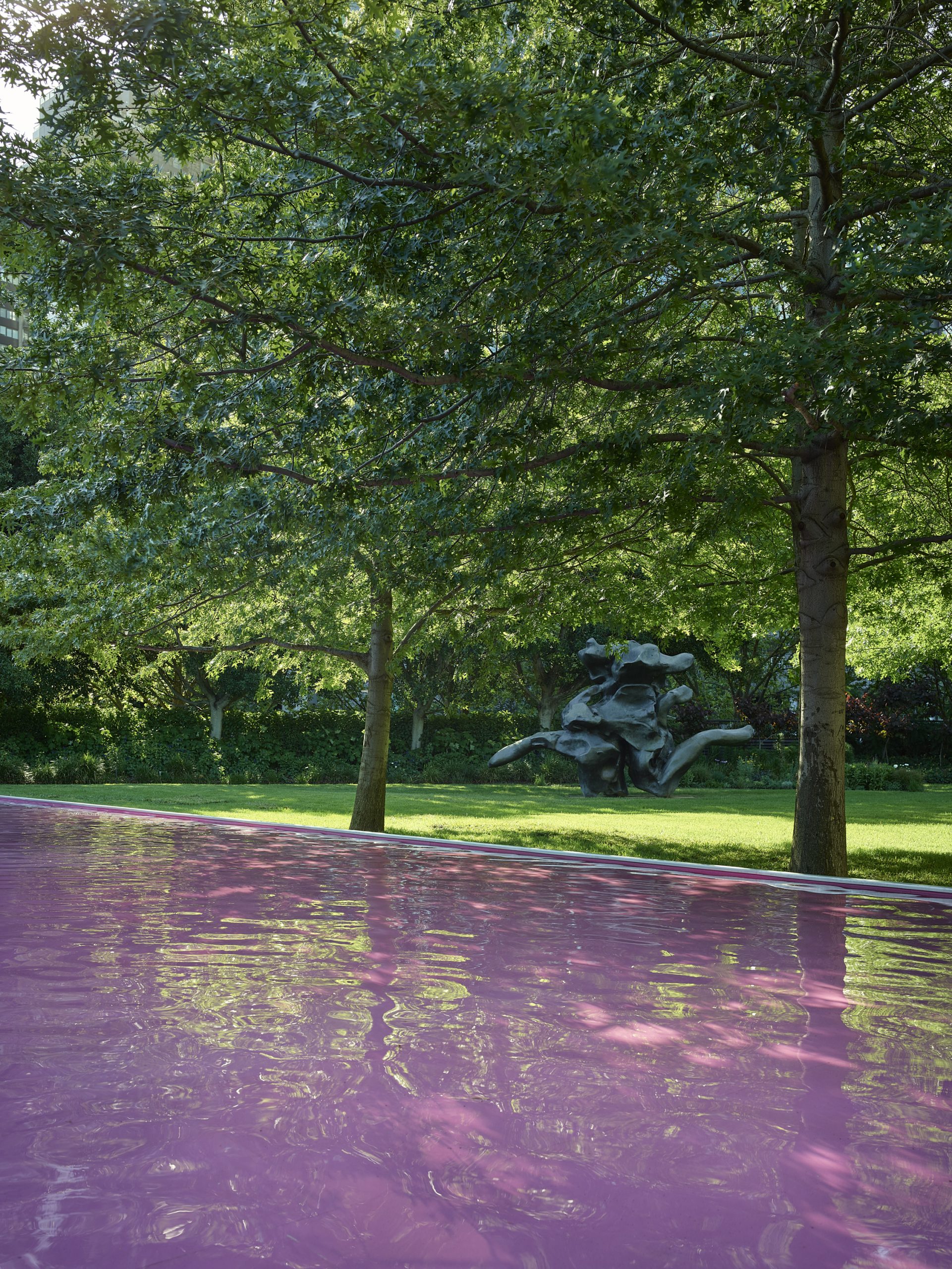 Irrespective of age, identity, socio-economic circumstance or political leaning, environmental adversity and geopolitical complexities are now paramount concerns within the collective consciousness. The impetus to grapple with the realities of the Anthropocene, the ecological consequences of which we are now regularly confronted by in Australia, is both binding and urgent. This is the premise of Pond[er], the winning scheme for the 2021 NGV Architecture Commission designed by architecture studio Taylor Knights in collaboration with artist James Carey. The project was conceived in late 2020, at the close of a decade that witnessed unprecedented bushfire, flood and drought, forcing us to confront the conditions of our ailing waterways and depleted ecosystems. In response to the enormity of these issues, Pond[er] harnesses the unique cultural context provided by the NGV to present architecture that embodies, and cultivates, a culture of environmental care and custodianship.

Within the discipline, architecture is broadly understood as a cultural register that, through its inherently public interface, has the potential to provoke and encourage individual behaviours and influence the way we interact with one another. The NGV Architecture Commission provides an opportunity to demonstrate this value more explicitly. The annual commission is selected via a two-stage national competition in which architects or multi-disciplinary teams submit a design for a temporary structure in the Grollo Equiset Garden. While architecture is generally experienced incidentally, art in the gallery setting is approached by visitors with a predetermined expectation that the works on display explore themes with which they can engage and form a personal dialogue. Placing the commission within the context of the contemporary art gallery thus affords architecture the same public gaze as the exhibited artwork.  In this, it plays an important role in reframing encounters with the built environment and broadening the perception of architecture as a critical practice. The built (or unbuilt) outcome is understood as the result of research, forming a proposition for progressive and positive ways of being in the world.

Pond[er] draws on the parameters of its immediate architectural context, along with conventions of established civic spaces and easily legible allusion, to provide visitors with an immersive experience. The work serves as a catalyst, prompting us to consider our relationship with the environment, its pervasive position in our own existence and the precarity of its continued future.

Expressed in plan as a 26m x 26m square bisected by an angled ramp, Pond[er] takes its proportions from the Australian, Sculptural and Oriental Courtyards that formed part of the original Roy Grounds’ designed NGV building. On either side of the walkway, within the boundaries of the square, are two raised volumes that hold land and water respectively. The pink pond references the pink salt lakes of regional Victoria while the garden is planted with indigenous wildflowers – a variety of species that will bloom at intervals across the duration of the exhibition. By interiorising these landscapes within the edges of the installation, Taylor Knights and James Carey draw visitors’ focus towards the local ecology and invite them to engage with it as they see fit.

Devoid of edifice or overt spectacle, Pond[er] reframes how visitors can understand architecture and avoids being prescriptive about how it might be occupied. More public space than architectural object, the intervention abstracts the typical courtyard diagram that formed the basis for the design. In depriving it of walls, the perceived edges of the ‘courtyard’ are expanded to the limits of the Grollo Equiset Garden, creating a gradated pattern of inhabitation. The central condition, which is highly saturated and aqueous, provides a focal point, a space that oscillates between dense activity and vacant stillness. The perimeter of the square, with seating along the northern edge, suggests conversation and contemplation, and the tree studded garden serves as a shaded outer perimeter. This configuration follows the logic of a city square, one of the most established and successful civic typologies. The treatment of the installation and its relationship to the existing space invites the dynamism of the public square, providing a place to engage in activities and interactions that can vary depending on individual desires and the conditions of the day. In this, Pond[er] encourages people to visit multiple times, to engage with the work and its themes in its varied states.

“We wanted to depart from the idea that architecture can be experienced by one time visitation,” explains Eva Florindo, architect at Taylor Knights. “There’s a culture of consumption we are challenging with this project. When people visit an architectural object, they often move through it once and consume it and there’s an end point to that ‘experience’. Instead, we wanted to make a place that people would return to, where they can stop, gather, play and discuss ideas.”

With discussion around how architects, designers and artists use their practice to address environmental concerns a conceptual impetus for the project, the application of material and the lifecycle of the building products used becomes particularly important. “We learned from National Park projects, where the detailing and approach to built interventions is one of care – where the paths don’t necessarily go in a straight line and materials are lightweight and porous,” notes James Taylor, director at Taylor Knights. The team also developed the design for construction to ensure a relationship between the standard dimensions of materials and their application, resulting in an overall reduction of waste. The materials used throughout are locally sourced and manufactured and, where practicable, will be disassembled and redistributed to Landcare Australia, as well as Indigenous and community groups who will repurpose them to suit their needs.

A project borne of philosophical discussion – about humanity, the environment and how the two coexist – Pond[er] has resulted in a conceptually rich architectural diagram, a logical construction methodology and a well-used and enjoyed public outcome. This is testimony to the value of meaningful collaboration between artists and built environment professionals – not only architects. Taylor Knights describe their experience of working with Carey as an organic process based on a series of meetings discussing ideas, where James – an artist and Lecturer in Interior Design, School of Architecture & Urban Design, RMIT – provided a critical lens and gave clarity to the design concept. What this process shows is that artists can act as hyper-valuable collaborators and consultants on the permanent projects that shape our cities. Conceptual artists offer a well-researched, critical world view, which is where the value of working with artists in the context of the built environment can lie. Often employed to regenerate disused spaces in the service of capital, the notion of the artist as consultant, from initial briefing and consultation phases through to post occupancy, represents a shift away from understanding the artists’ value as a producer of visual or physical outcomes towards a recognition of their intellectual property, creative direction and ideas. This project is a good example of how fruitful that can be.

With Pond[er], the creative team have taken the platform afforded them by the context of the NGV Architecture Commission to open dialogue around pressing environmental issues, expressed with conceptual clarity and communicated in a manner that is engaging, constructive and optimistic.

Pond[er] is free to visit in the Grollo Esquiet Garden at NGV International, Melbourne until August 28, 2022. 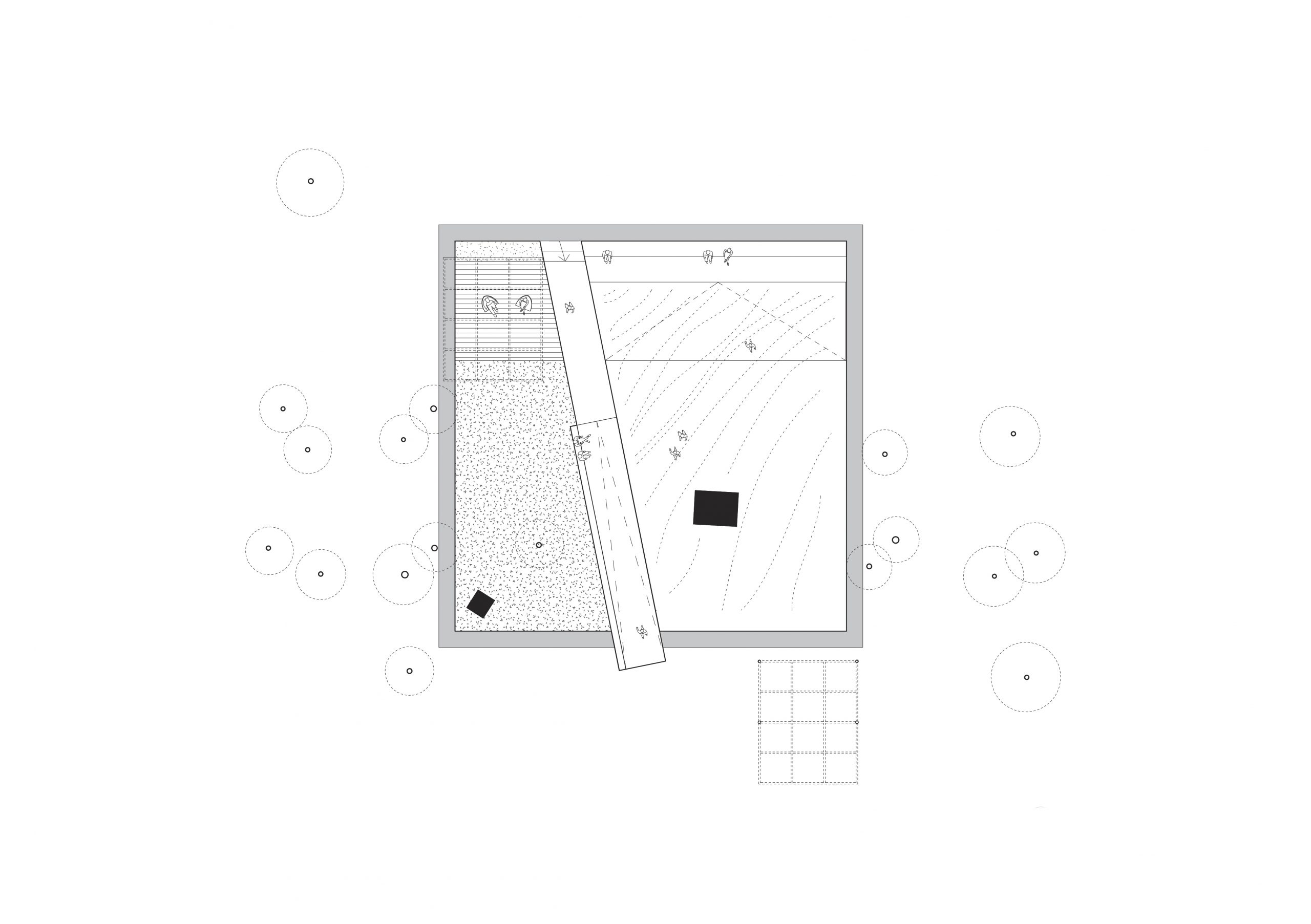 “A project borne of philosophical discussion – about humanity, the environment and how the two coexist – Pond[er] has resulted in a conceptually rich architectural diagram, a logical construction methodology and a well-used and enjoyed public outcome.” 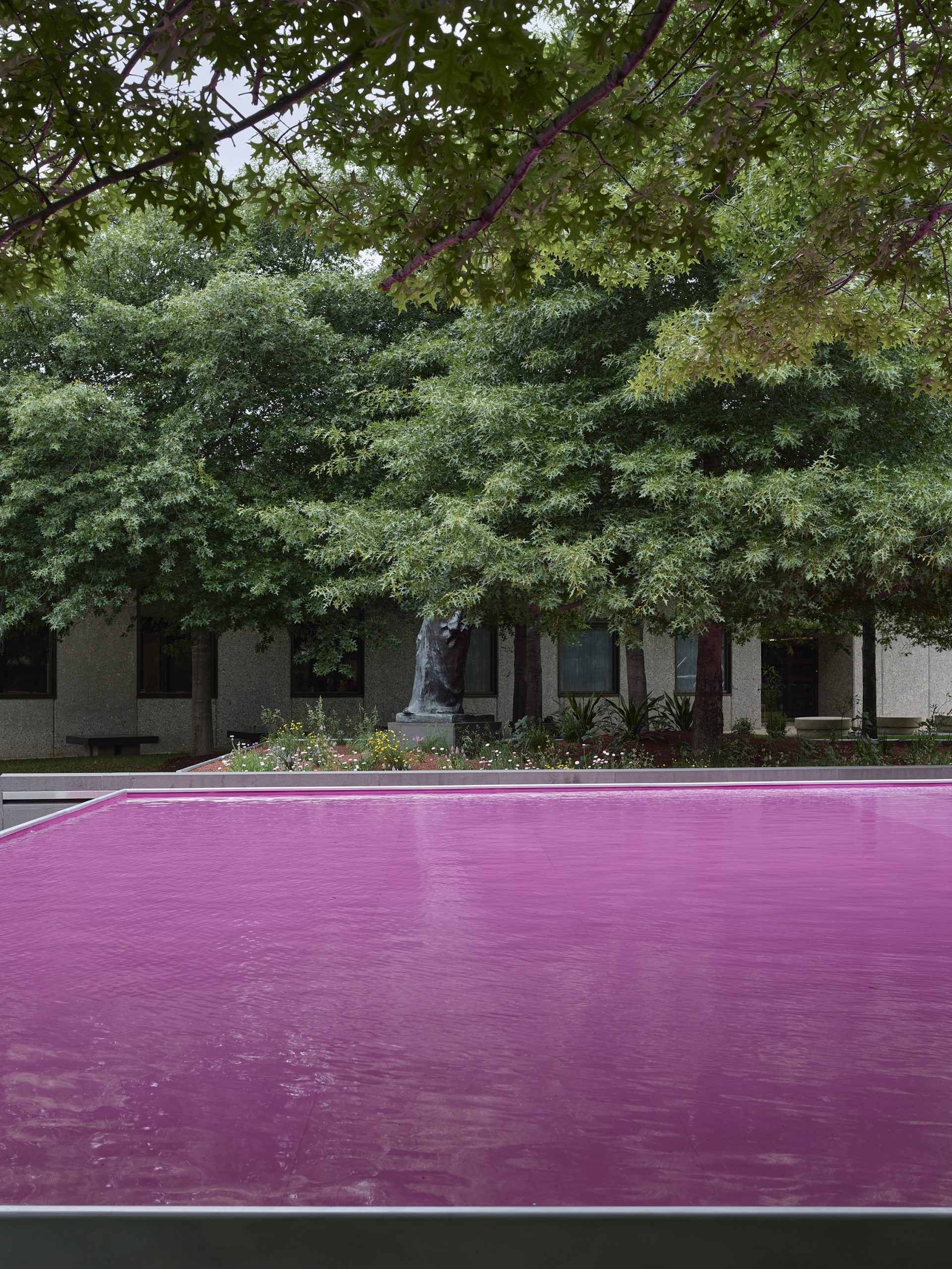