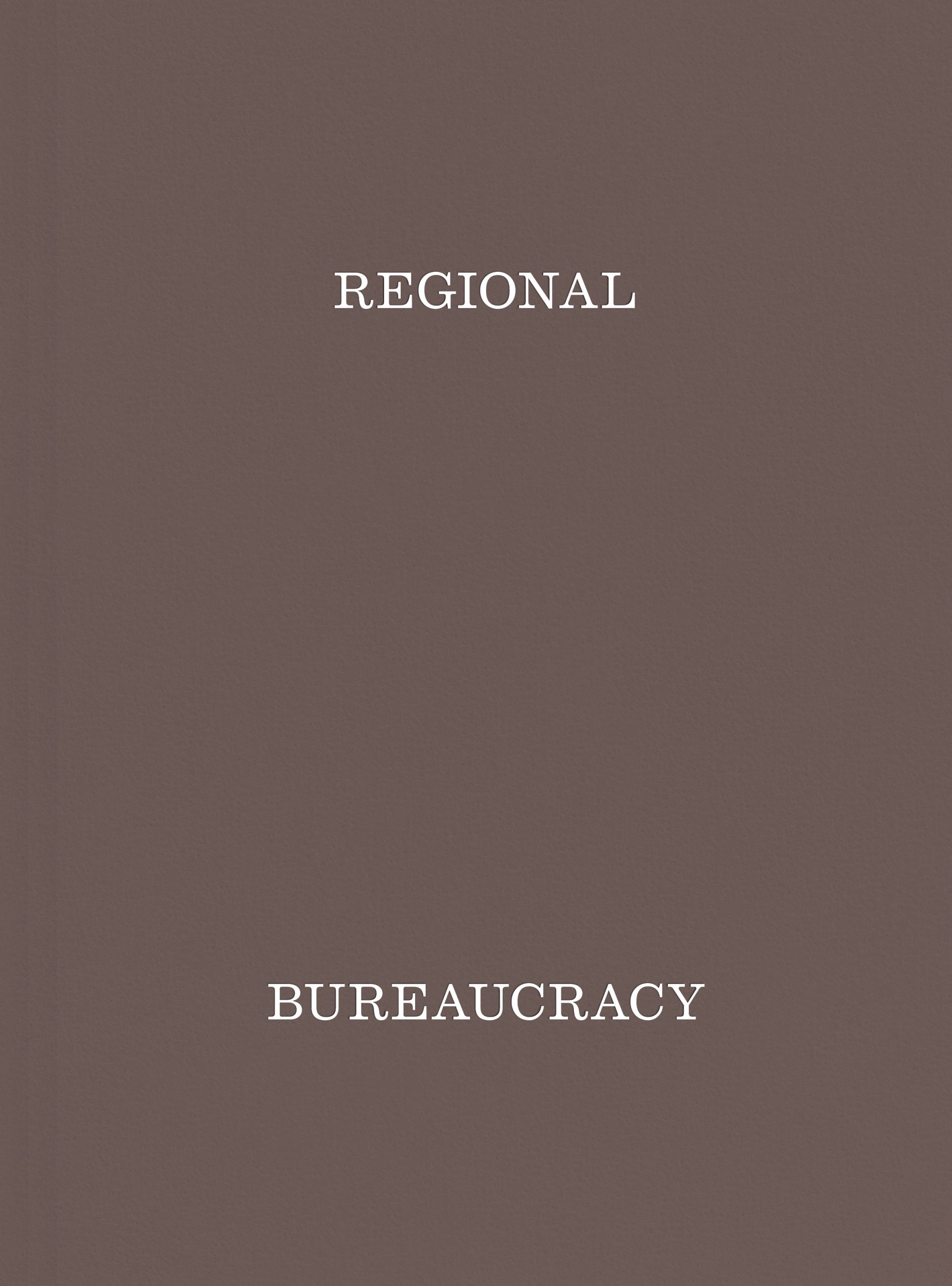 The NSW Government Architect’s Office (GAO) effectively commenced in 1816 when Governor Macquarie appointed former convict Francis Greenway as Acting Civil Architect. In 2015 an existential review saw the powers-that-were dismantle the then-120-staff-strong GAO, outsourcing the practice of architecture and allied expertise in favour of a smaller, internal advisory and advocacy role. At its peak, the GAO had comprised more than two hundred built environment professionals dedicated to the design and delivery of public places.

The new version of the GAO was modelled on others that had success around the country, foremost at that time being the Office of the Victorian Government Architect (OVGA), which I’d helped establish in 2006 as Associate Victorian Government Architect. The OVGA was created by Premier Steve Bracks, who valued good design and its contribution to public wellbeing and culture. He ensured his government, and the public service, took the role seriously. We weren’t there to deliver architecture, but to help foster a culture of design excellence and support government as an intelligent client. Blessed by great leadership, we had real impact. But the authority and effectiveness of the advisory model is vulnerable to changing political and policy emphases, and the personal capabilities of those at the helm. Although the model was adopted or reinvigorated in most Australian states and territories, its successes have varied.

Before the change in system, the NSW GAO delivered multiple public buildings and spaces over its two hundred years in operation. This in-house practice was inherently cumbersome, but it also ensured that a rigorous knowledge base and expert capability was deployed with the singular purpose of creating good public places.

Through drawings, photographs and written commentary, Regional Bureaucracy records 42 buildings produced by the GAO between 1958 and 1988. It’s serious and carefully put together, but there’s an ambiguous tone I find somewhat disconcerting, starting with the title itself. The word ‘bureaucracy’ is commonly used to signify glacially slow processes, general obfuscation and pervasive incompetence. In the context of this title, it’s hard not to read the almost-dusty-brown cover as an allusion to this stereotype. Or perhaps it refers to the late ’60s and ’70s when these buildings were made, and brown was in its heyday. In the introductory essay by Guillermo Fernandez-Abascal and Urtzi Grau, the use of highly charged phrases like ‘welfare state’ may be technically appropriate, but nonetheless imply disproportionate social dependency, whose relevance here is unclear, other than as an opportunity to play on words. The essay itself is entitled ‘good enough’ and the works are characterised as “close to [or] good enough” throughout.

But the buildings documented in Regional Bureaucracy are largely exceptionally good. They compare extremely favourably to many of their contemporary counterparts, which are more narrowly intent on self-expression than comprehensive solutions. Although outdated in at least some respects, they’re still resonant, telling stories of their time. All but two are still standing, and standing well. They were designed with sensitivity to the specifics of climate and context, they were fit-for-purpose, founded in sustainable design and very well made in detail and execution, their resolution complete and construction assiduously monitored by the GAO. They’re “sturdy,” as Luka Enstrom-Gibb remarks in his comments on the Windsor High School. Not only that, but they’re also frequently progressive and innovative, sometimes poetic and always palpably dedicated to serving the public good. Their imperfection in the context of contemporary knowledge offers important lessons but doesn’t diminish their quality nor the respect due to them.

The opening ‘Reader’s Note’ of the book declares that it is “not intended as a comprehensive account [but] an unabashedly selective and subjective map of [the GAO’s] production.” It’s an important acknowledgement because it frees us to see Regional Bureaucracy as a patchily rigorous, idiosyncratic collection, rather than an academic historical record. It also conjures the adventure that must have been had by the authors, venturing out to the regions when much of the world was locked down. It would seem fitting to have included the map locating the buildings up front rather than buried appendix-like at the end, and I wish the day trips had been charted there too, as a hinted touring guide.

In presentation, an apparent commitment to white space and consistency of scale means plans and sections are often a bit too small and details, lovely though they are, a bit too big. I wish there was more information to convey site and context, which seems to have fallen by the wayside. And though there are fabulous historical and heroic images, they don’t give much away and are almost completely devoid of people, a likely product of old and lingering approaches to architectural photography.

Above all, I wish more buildings were included in Regional Bureaucracy, along with the attendant reflections, anecdotes and commentary – which are a delight, and the real strength of this book. From a large mix of credible and insightful contributors, they are informative and engaging, easy to read and varied in voice, depth and length. They bring the works, the people that made them and the bureaucracy’s motivations to life. The book is punctuated around halfway through by a very personal chat between current NSW Government Architect Abbie Galvin and Beverley Garlick, a highly respected practitioner of long-standing who worked as a young architect in the GAO. It is both informative and engaging.

Despite its ambiguities, Regional Bureaucracy is ultimately underpinned by a deep respect, probably even a passion, for the works it surveys and the people who produced them. At the same time, there does seem to be a kind of self-conscious unwillingness to declare this outright, which makes me wonder if it’s unfashionable to honour this kind of work? It’s not until Helen Lochhead’s terrific essay at the end, set as a post-script, that we find a clear and forthright celebration of the practice, its purpose and product, nicely wrapping the book up as an important homage to a significant legacy. Politicians come and go, and it’s the slower-paced bulk and constancy of the bureaucracy that protect us from their worst vagaries, even while it frustrates us. Full of expertise, talent and an inherent understanding of the value of good process, the best bureaucracies bend as policies shift but they do so with professionalism, integrity and a dedication to the public interest and the well-being of people above all. The excellent buildings recorded here are a testament to that honourable endeavour, and Regional Bureaucracy is in some ways a lament for its passing.

Regional Bureaucracy can be purchased at perimetereditions.com/regional-bureaucracy. 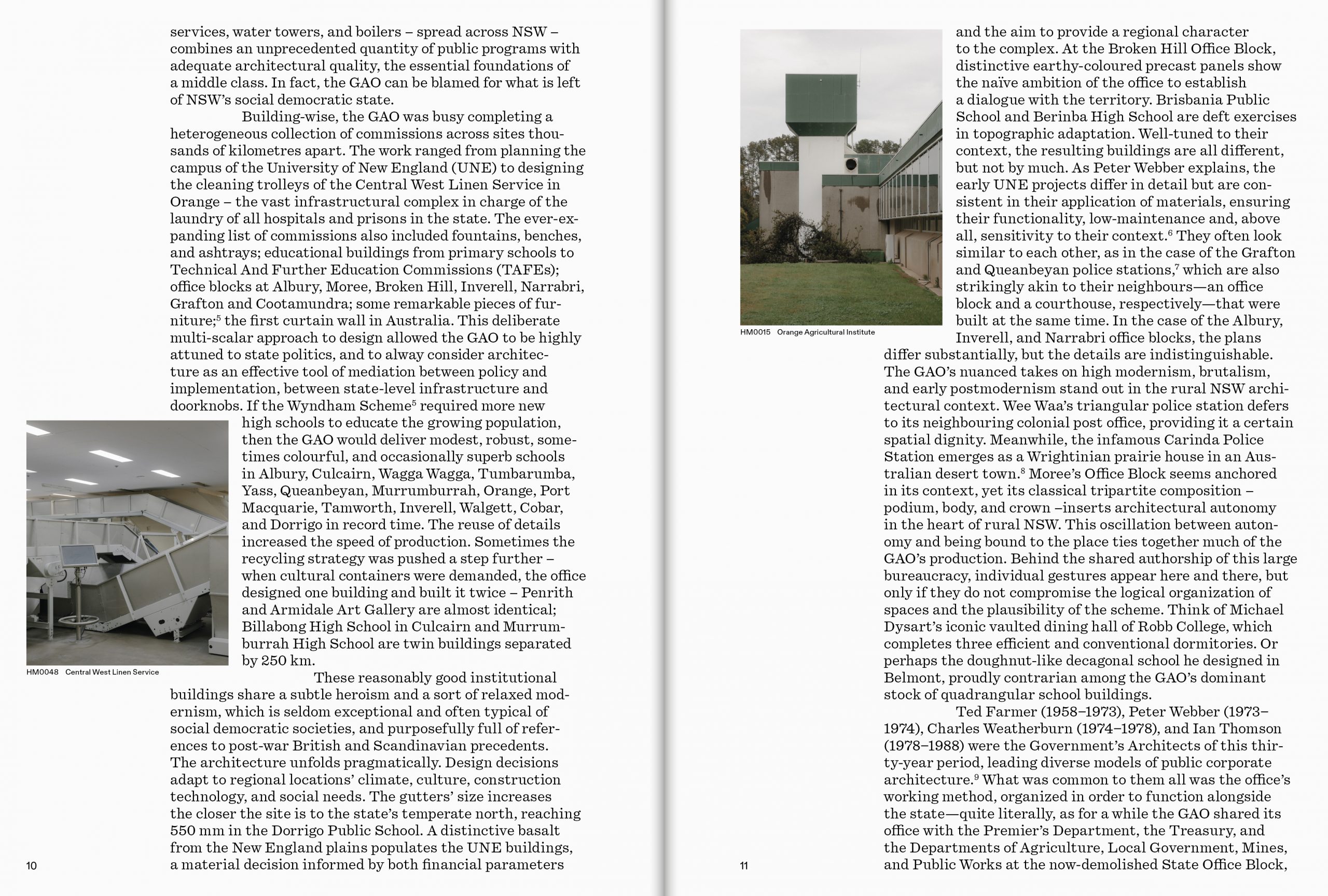 “The buildings documented in Regional Bureaucracy are largely exceptionally good. They compare extremely favourably to many of their contemporary counterparts, which are more narrowly intent on self-expression than comprehensive solutions.” 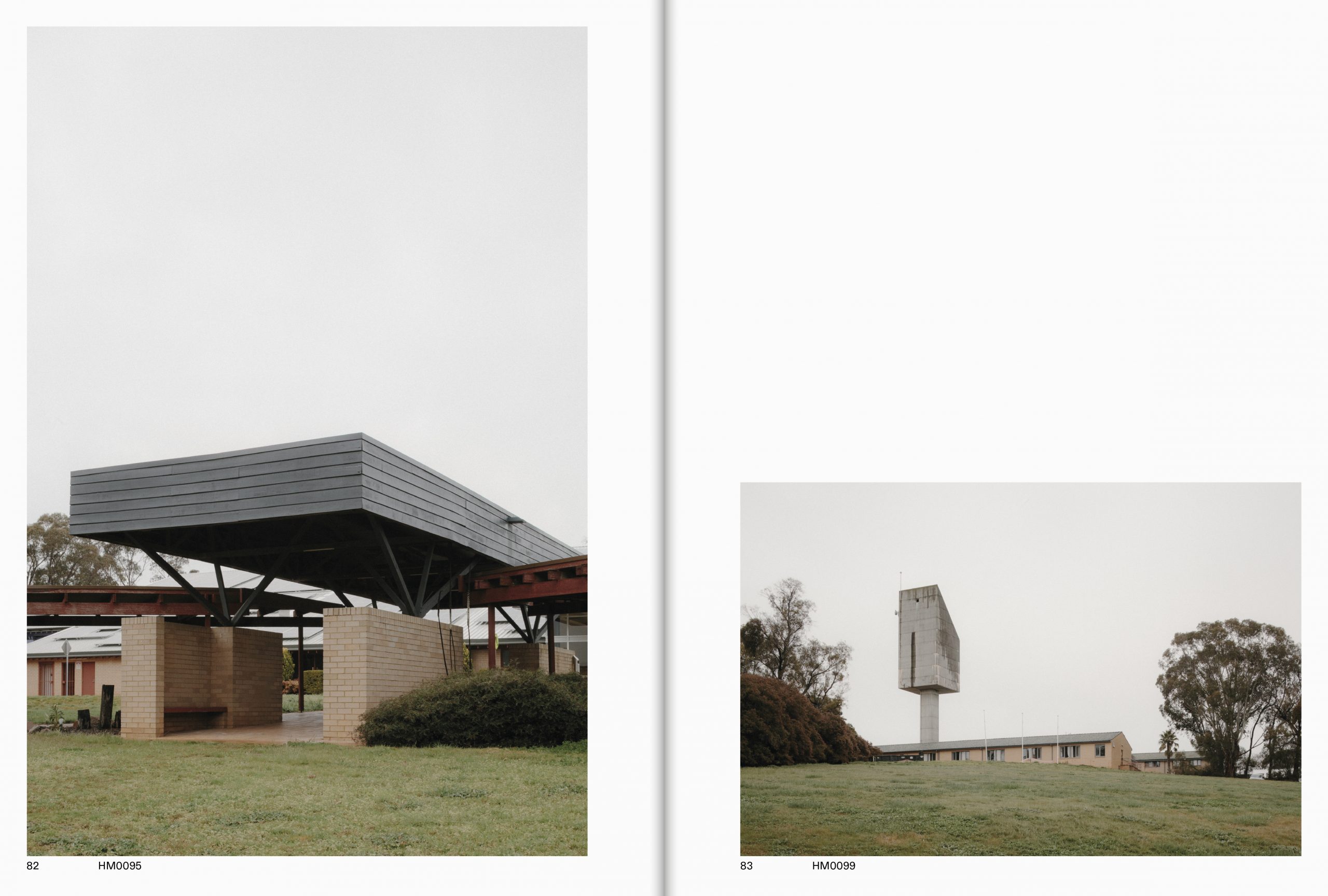 “Regional Bureaucracy is ultimately underpinned by a deep respect, probably even a passion, for the works it surveys and the people who produced them.” 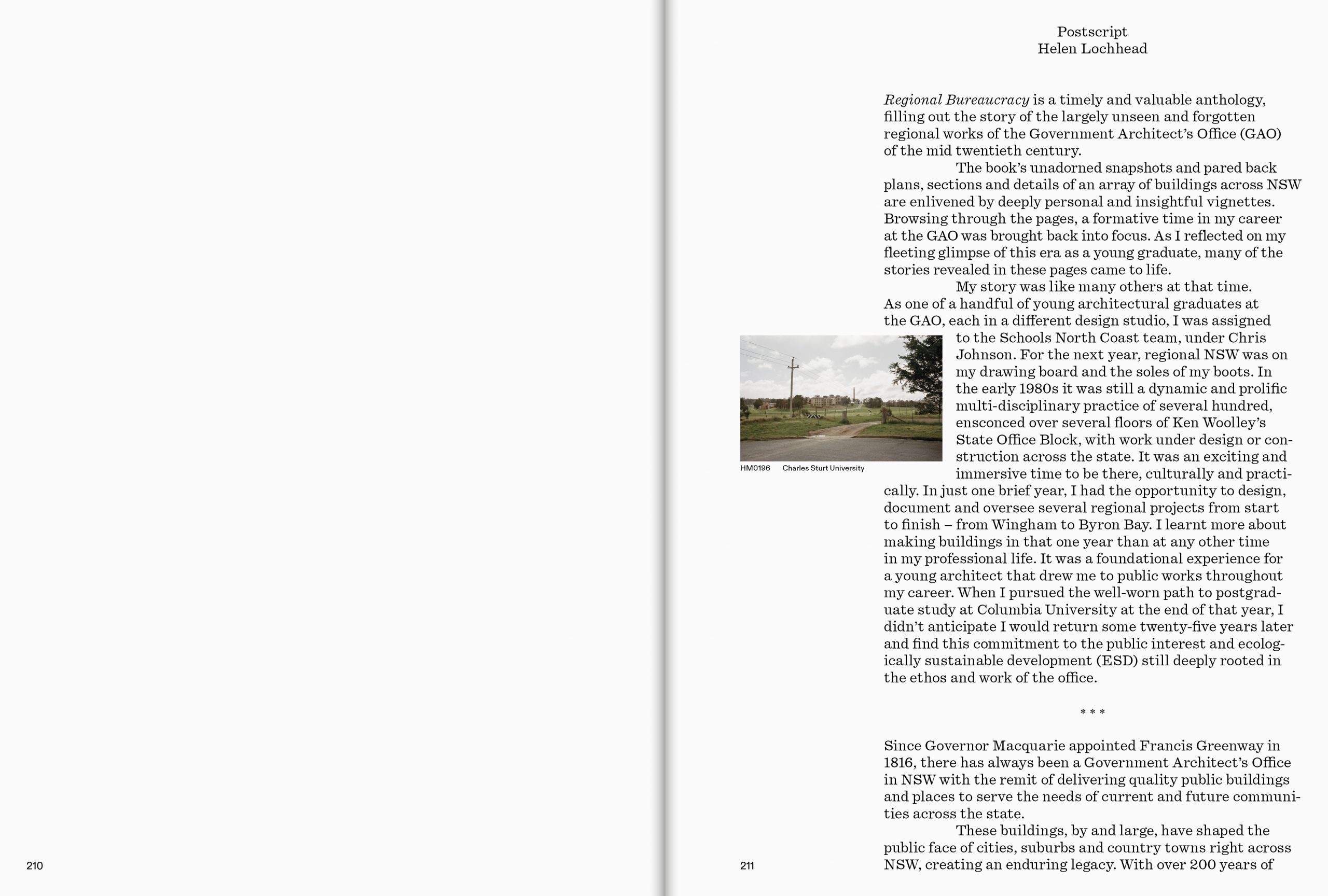