Lucy McRae: on the fabric of 'being'

Lucy McRae sits at the edge. She is at once artist, architect, scientist, innovator, film maker and seamstress. Here Lucy speaks with curator Ineke Dane about the if, how and why of human evolution as propelled by laboratories; the potential born of our increasing entanglement with technology and Heavy Duty Love, exhibited at the 17th Venice Biennale Architettura. 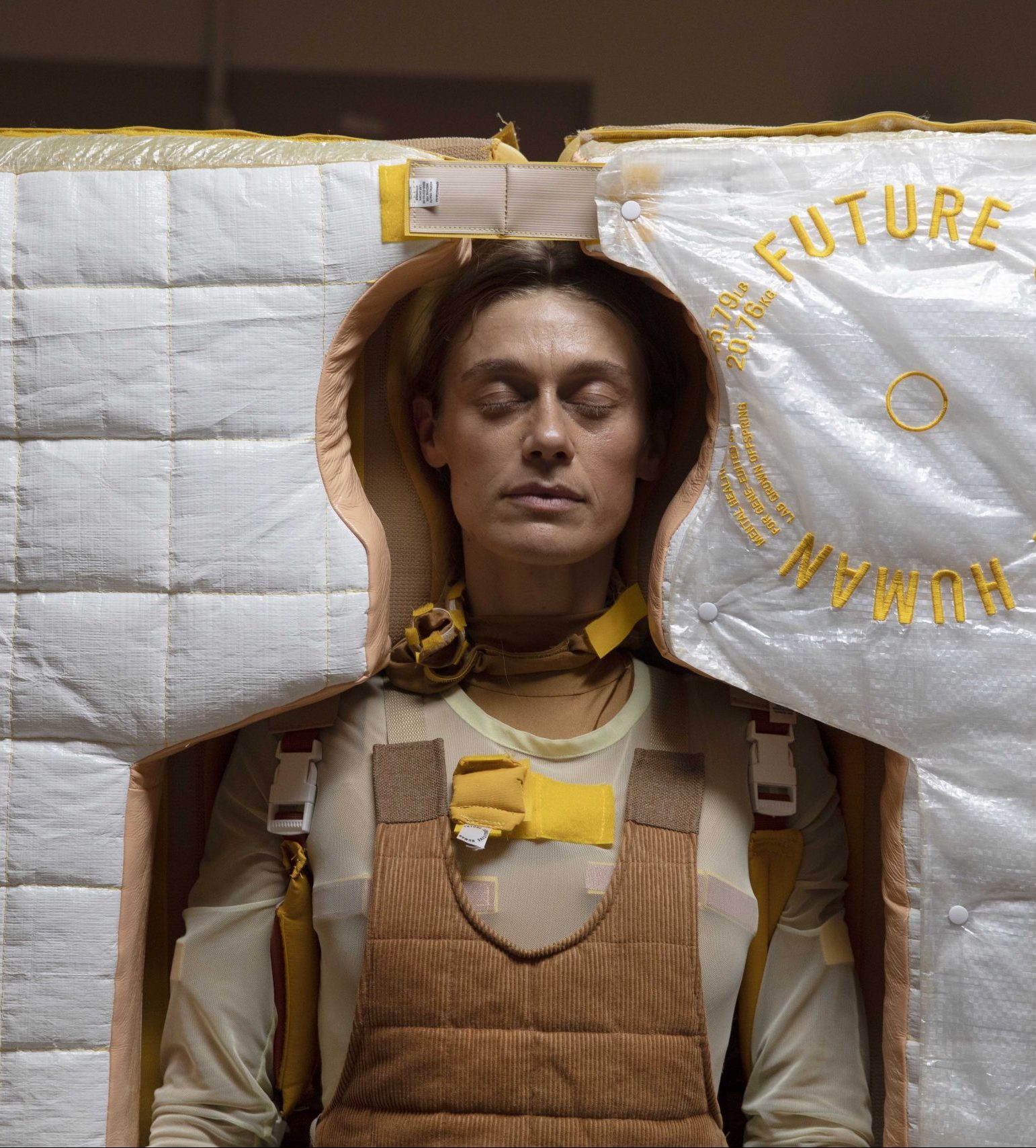 ID: Could you start by giving a guide to the term ‘body architect’, as an entry point for those who may not have come across your practice before?

LM: ‘Body architect’ is a made-up title that won me a dream job fifteen years ago. The slippery term still follows me around. The TED Fellows director suggested ‘science fiction artist’ after a heart-to-heart about feeling misunderstood. To conserve the energy it takes to explain the ins and outs of what I do, I say to most that I’m an artist creating scientific ‘what ifs’ in the form of film, photography, future products and immersive installation, as a way of asking the public: do we want this? I don’t create solutions, but science-fact worlds that question the future.

I downloaded the ‘body architect’ title during a blurry Post-It note and wine session with Clive van Heerden, the director of a far future design research lab at consumer electronics giant Philips. It was packageable enough to win me that dream job. We were a small interdisciplinary group of outsiders at Philips: a fashion designer, social scientist, engineer, tailor, product and innovation designer. We spent four years developing electronic tattoos, emotion sensing jewellery and various other wearable tech. The purpose of our team, called Probes, was to develop cutting-edge prototypes for technologies that could sense human emotion; to develop a ‘maybe tech’ that moves away from purely rational devices towards future tech that blushes, shivers, frets or arouses, like we do.

ID: How do you see your Venice work Heavy Duty Love in the broader context of the Biennale Architettura curatorial theme ‘How Will We Live Together’?

LM: Scientists are accelerating ways to direct our evolutionary path. Powerful genetic engineering tools such as CRISPR [gene-editing technology] can fundamentally redesign our species. Be it gene-edited babies or kids grown in artificial wombs, playing with the very building blocks of life creates terror and inspiration in equal measure.

Heavy Duty Love is a mental health prop from a future yet to happen; a domestic, sporty device sandwiching the body between layers of thick squishy stuff normally used in camping or construction. If we do head toward a future where life is designed from scratch, would we seek new types of intimacy? Heavy Duty Love would be found in domestic spaces, compensating for a lack of human touch in early life. The project wonders whether sponge-like machines will be able to build trust and connection, re-enforcing the protective embrace of a parent, lost by virtue of such lab grown origins.

Inspired by bleeding edge technology, this cautionary narrative wants to engage with science at street level, merging complexity with the familiar. Here, art is no longer the vessel but instead connects to the bulk of science and tech – debating the uncomfortable and complex, jointly forging new types of futures and ways we may live together, through science and story.

ID: Thinking about the womb, does Heavy Duty Love speak to current debates on abortion in the United States or do you see the discussion and concepts as mutually exclusive?

LM: Heavy Duty Love suggests that in a post-CRISPR world, kids are brought to term and grown in complex, sensitive wombs in a lab. The speculation includes that these future-kids develop different/unfamiliar neurobiological quirks, through lack of touch and absence of foetal programming in the womb. By virtue of women being separated from pregnancy, science and biotech become in vitro paternal/maternal surrogates. This far-future ‘what if’ replaces abortion with a plethora of incomprehensible ethical unknowns. Donna Haraway in her essay ‘A Cyborg Manifesto’(1985) suggests the idea that gender equality can never be reached until women have been ‘unburdened’ from carrying babies, as that puts them in a position of disadvantage from an evolutionary perspective, as reflected in societal hierarchies. Suggesting we divert the womb is not solution driven, but rather a motivation to ask impossible questions. Can science and technology forever change what makes us human? And if they can, should we pursue that?

ID: Do you think the architecture of our environment has a direct effect on the way we move, operate and engage with the world – how we care for it and others?

LM: I’m a Visiting Professor at the Southern California Institute of Architecture [SCI-Arc]. This semester, in our program titled Ancient Future, we are investigating whether human consciousness could be a scalable technology that shapes our environment.

Psilocybin, more commonly known as magic mushrooms, has been legalised in parts of California. The popularity of psychedelics shows a willingness for scientific approaches to drugs that have medicinal benefits. Along with research programs at eminent institutions such as John Hopkins, Imperial College, King's College, Yale and NYU, Melbourne’s Medicinal Psychedelics Research Network (MPRN) is investigating the potential medical use of various psychotropic plants and psychedelic compounds, such as MDMA, LSD and ayahuasca, for treatment of mental health. Strong signals of this resurgence are also seen in Fantastic Funghi, a 2019 documentary highlighting the therapeutic uses of such compounds, bridging this taboo world with that of the general public. Guided practices, such as meditation and medicinal psilocybin, are fast track door openers and fundamental catalysts for consciousness. They turn up the volume on the ‘mirror’ of who we are.

Scaling-up consciousness has effects in the physical world through the intensification of clarity, enhanced mood and wellbeing, as well as from an ecological perspective via an increased connection to nature, eco-consciousness and capacity for different modes of being in the world. At a sociological level, it enhances human connection, increases empathy, compassion and pro-social behaviour.

ID: What role do you think commerce or the economy has in the advancement of technology, and in turn do you think there are vested interests within the commercial world to entangle and exponentially embed the human body and mind with technology?

LM: This headline recently hit my inbox: ‘The billionaires investing in the superlongevity revolution’. The article was accompanied by a photograph of ten men smiling, as if they had dollar signs reflecting in their pupils, referencing a Guardian feature “that the world is at the cusp of a significant bio-cybernetic transition; one that is poised to disrupt all areas of society, even the very nature of life and death.” I’d rather back artists like Jae Rhim Lee, who is developing mushroom burial suits. For fifteen years I’ve been making unapologetically feminine approaches to tech – far-reaching visions for how humanity might exist hundreds of years from now, be it future concepts of reproduction and ‘ex utero’ pregnancy, or asking if, when tech gets so small, should we eat it? Undoubtedly, editing the genome, biological perfection and the promise of immortality is worth kajillions. I asked a Californian physicist who is developing a method for injecting sound waves into the blood as an anti-ageing tool why we would want to live longer. His position was: ‘If we can, why not’.

I’m curious as to how immortalist concepts intersect with Buddhist philosophy. I’ve read that the root of fear is our fear of death – always wanting to live longer, to become whole or fully realised. If death is no longer a certainty, would fear be replaced by other unpleasant emotions? If so, I wonder what they would be.

Originally published in Union 01. For more about the artist subscribe to Union magazine. 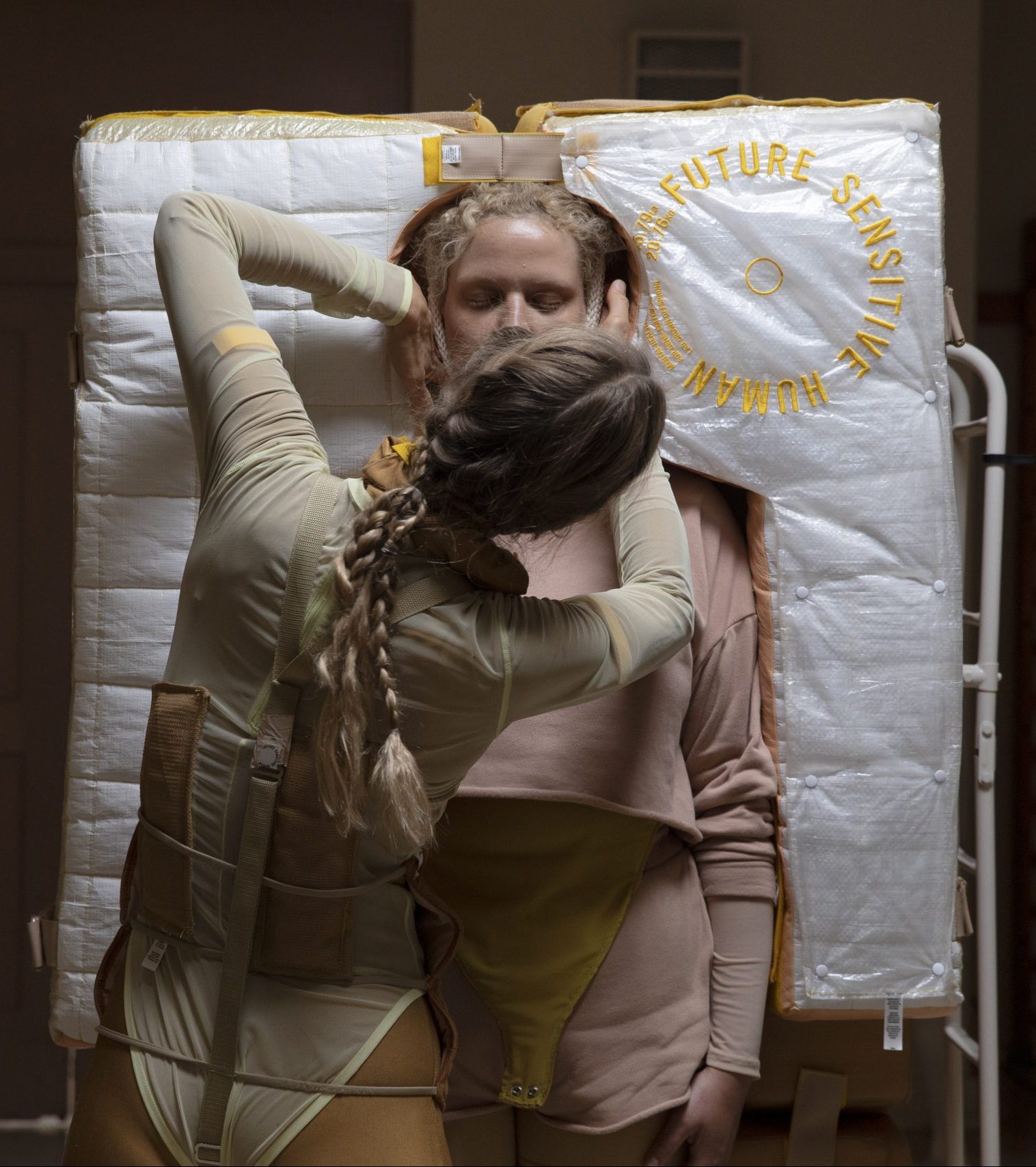 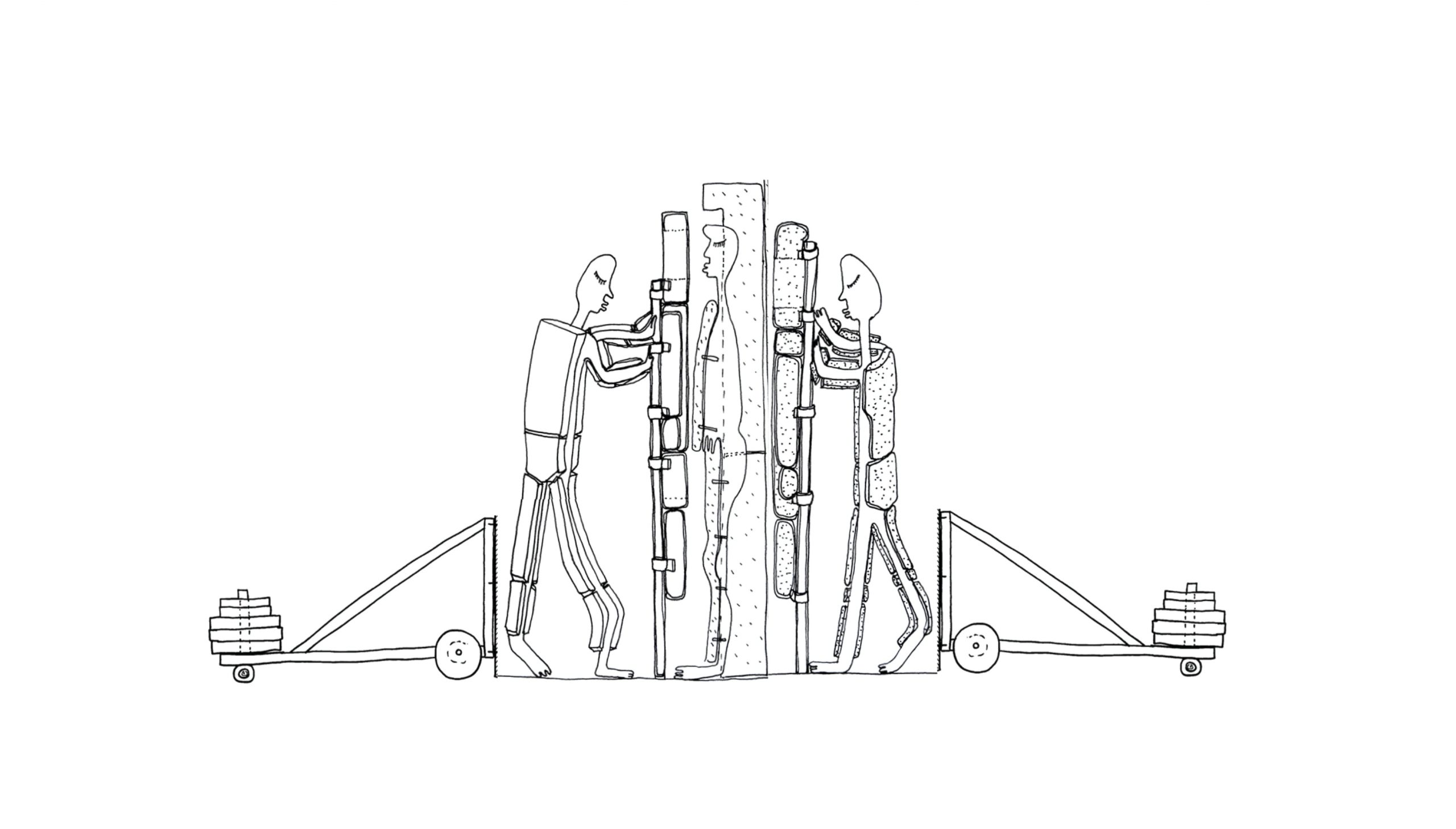 “Scaling-up consciousness has effects in the physical world, as well as from an ecological perspective. At a sociological level, it enhances human connection, increases empathy, compassion and pro-social behaviour.” 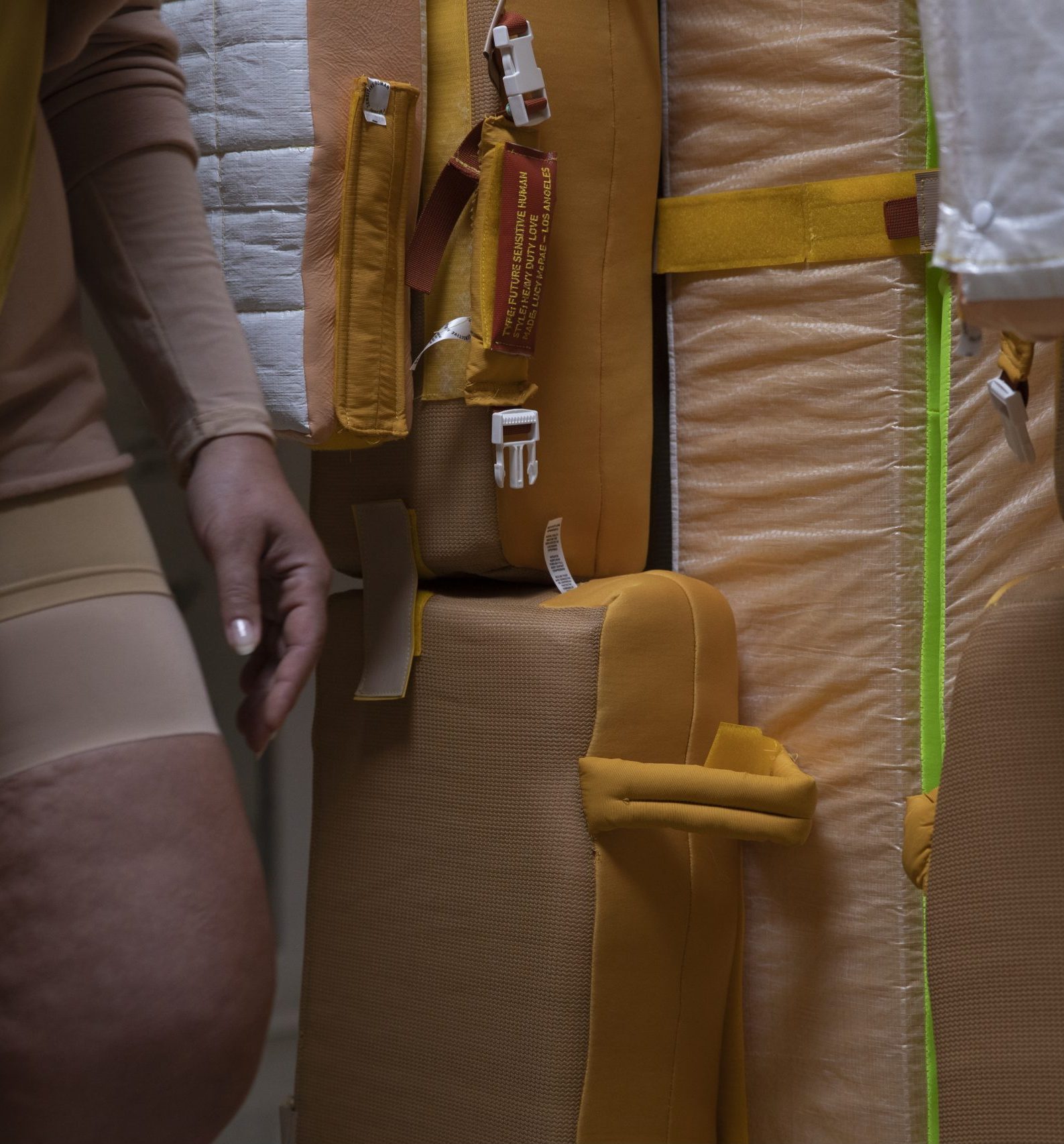