Taking sculpture as a political medium, Isadora Vaughn work in parts – bringing different components and raw materials into the gallery and assembling them in situ. Vaughan’s works encourage us to see the world as a tangle of interlocking and competing systems, and to consider our own role within them.

Photography
Courtesy the artist and STATION

Out the back of Isadora Vaughan’s studio, there’s a small yard that looks onto a huge, semi-vacant lot. “They’ve been building warehouses out there,” she says. Last year, she watched as they dug enormous basalt boulders out of the ground. “There were these huge rock breakers out the back, turning these giant, giant rocks into smaller boulders.” The rocks got smaller and smaller. “They were making gravel,” she explains. “It was just one of the most amazing and insane processes.”

Vaughan likes working outside. From her spot in the yard of her Melbourne studio she can also see ponds that have been built to filter runoff before it reaches a nearby creek. “All these beautiful, very precise endemic species have been chosen and planted around it. There are reeds – a whole system,” she says. “There are these machines that are doing, on some level, these fantastical things. You can see how much destruction and chaos it’s causing, but then there’s also this industry and this real presence, despite it all, of the native flora and fauna.”

“For me,” explains Vaughan, “Ogives is my construction of my neighbourhood – the conflict and the beauty and the horror that exist all alongside one another.”

Ogives (2020) was made with the support of the Australian Centre for Contemporary Art’s Macfarlane Commissions, and presented as part of Overlapping Magisteria at ACCA in early 2021. The commission followed on from major projects at Victoria’s Heide Museum of Modern Art and Gertrude Glasshouse, and the artist’s inclusion in the TarraWarra Biennial 2018: From Will to Form.

Ogives itself was a large and ambitious installation. There were hillocks of soil and gravel, a shed like a greenhouse and a sculpture made from the parts of an agricultural hay maker. There were also fences, coir logs and strange vessels like animal feeders. There were other references to lifeforms too, with objects grown from mycelium (branching, often thread-like, fungi filaments) suspended on industrial racks, and large ceramics shaped like cunjevoi.  As is usual in her work, Ogives’ references are diverse, spanning agriculture, industry and nature. “I’m interested in trying to bring the language of all these things together.” she explains.

Vaughan’s works are often unsettling and cacophonous. Her practice considers our relationship to nature, and the different ways we try to control or consume it – but it’s not always obvious, in her sculptural creations, what’s natural and what’s not. She’s interested in what she calls the friction in words and ideas, and her works often start as questions. “What does the word environment mean?” she asks. “What are the conditions that create your experience of a place? When we say environment, do we mean nature, or the constructs of wall, floor, ceiling?”

This line of questioning often takes her back to the fundamentals of gravity, water flows, air and light. “So much of what I’m interested in is the physical experience of being in the space,” she says. For Bilirubin Bezoar, her solo exhibition at Gertrude Glasshouse in 2019, she cast the gallery in a sickly, jaundiced glow. At other times, her works crunch underfoot, or smell.

For Ogives, Vaughan brought in bright blue bags of animal manure and stacked them by the entrance. “I wanted to have the presence of animals without necessarily having the animals themselves,” she says. The blue bags are “so iridescent, I feel like they’re almost these glowing artworks in themselves.” She describes them as a by-product of large-scale agriculture, neatly packaged for domestic gardeners. At the same time, she notes, they contain “thousands of tiny, perfect spheres shaped by the animal’s stomach and the conditions of what they eat.”

Some of her material choices are about unsettling value judgements, particularly around non-human life. But she also talks about her materials like a systems analyst. She wants to know where things come from, and what they say about how our world functions. It’s a rigorous approach to materials, and she credits her training at the Victorian College of Arts and tutors like Simone Slee for helping her see sculpture as a fundamentally political medium. It’s not about creating static objects, or “freezing time and space,” as she puts it, but developing something that’s in and of the world – and that can get a little messy.

Vaughan tends to work in parts, bringing different components and raw materials into the gallery and assembling them in situ. It means that “the two tons of gravel are just as sacred, but also just as worthless, as the bales of hay and the ceramics that have been fired to 1280 degrees and the glass that has been hand blown,” she says. “They can form together.”

She also considers the afterlives of her materials. “You know, the work doesn’t end with the show,” she says. Sometimes that means hours breaking up mycelium sculptures for compost or finding people who can repurpose objects once the exhibition closes. “I think what a lot of my work is trying to do is to emphasise the inevitability of transformation,” she says. Ogives, for instance, changed a little every day, as viewers walked over its uneven terrain.

Similarly, Organs of Cognition (2021), her major commission for The National in Sydney, was set up next to the windows at Carriageworks, where it was exposed to direct sunlight. The large-scale installation referenced flow forms and water control designs, not unlike the ponds near her studio. It looked like a tiered water garden, or a scientific filtration experiment, with ceramics like lily pads balanced on supports made from branches set at different heights. But at the same time, the whole system looked a little broken – there were spills on the floor and a bottle of murky brown liquid. In places, gelatinous skins hung from the structures, like they’d snagged on the way down. And yet, it still seemed capable of functioning – despite it all, as Vaughan might say.

Her works treat the natural world as both a resource and a force, and that comes out in her processes too. “My work and my practice, and what I’m making things out of, are very much informed by my environment and my everyday existence,” she says. “It’s the wandering along the creek and picking up old bits of mesh, you know, tied and knotted into the roots of a tree, that then forms the way you then adapt something in the studio. There’s potential in everything, in all matter.” Vaughan’s works encourage us to see the world as a tangle of interlocking and competing systems, and to consider our own role within those systems. Agriculture and industry are never far away, although she seems both suspicious and in awe of technology. She clearly enjoys studying her materials and learning new ways to push them around; there’s a degree of beauty, too, in the way that she assembles old agricultural equipment in Ogives. But then she’ll go and do something like include a bag of animal manure, or an object grown from mycelium, as if to say that the world is, and has always been, much more complex than we can ever fathom.

Isadora Vaughn is represented by STATION. 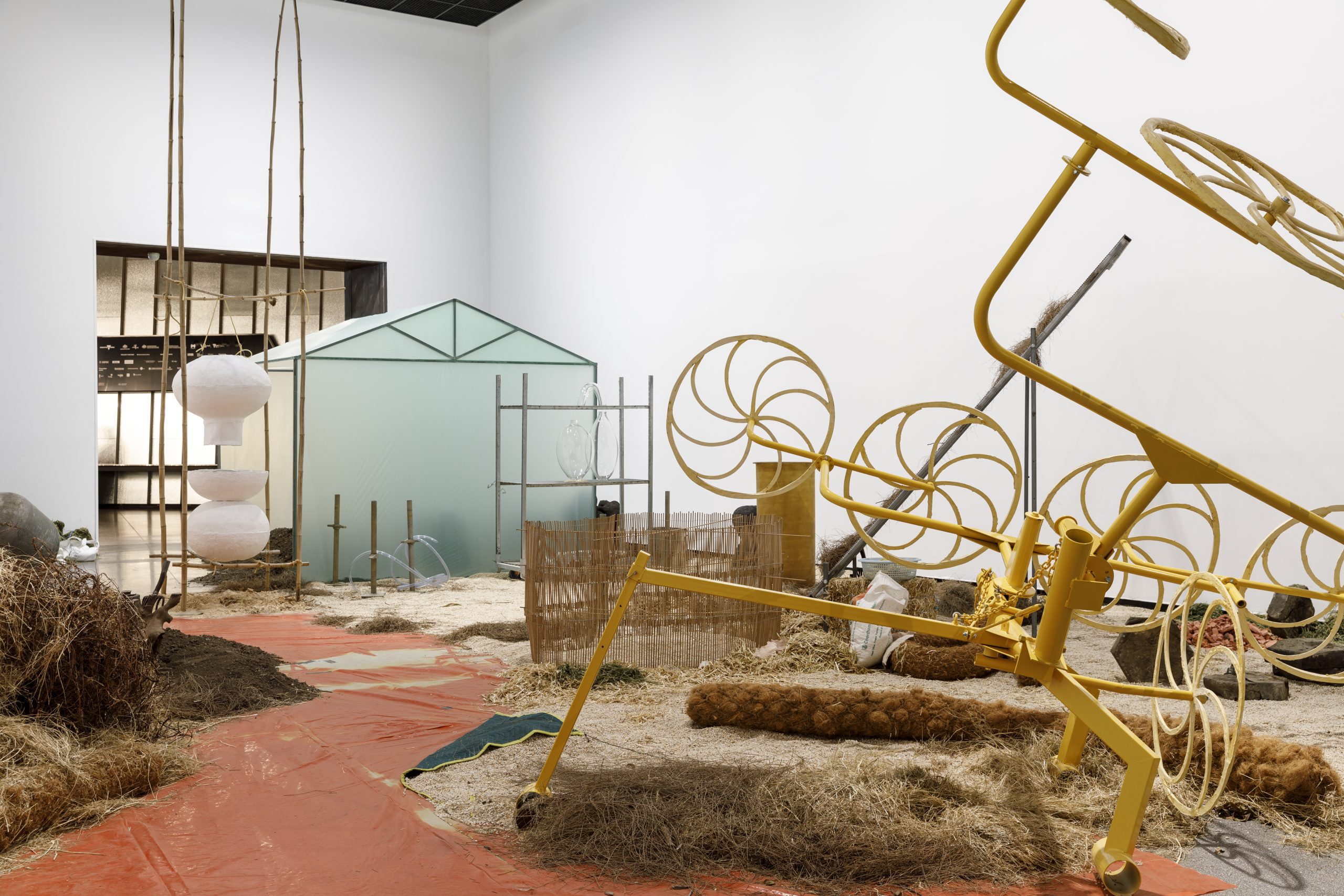 “Vaughan’s works are often unsettling and cacophonous. Her practice considers our relationship to nature, and the different ways we try to control or consume it – but it’s not always obvious, in her sculptural creations, what’s natural and what’s not.” 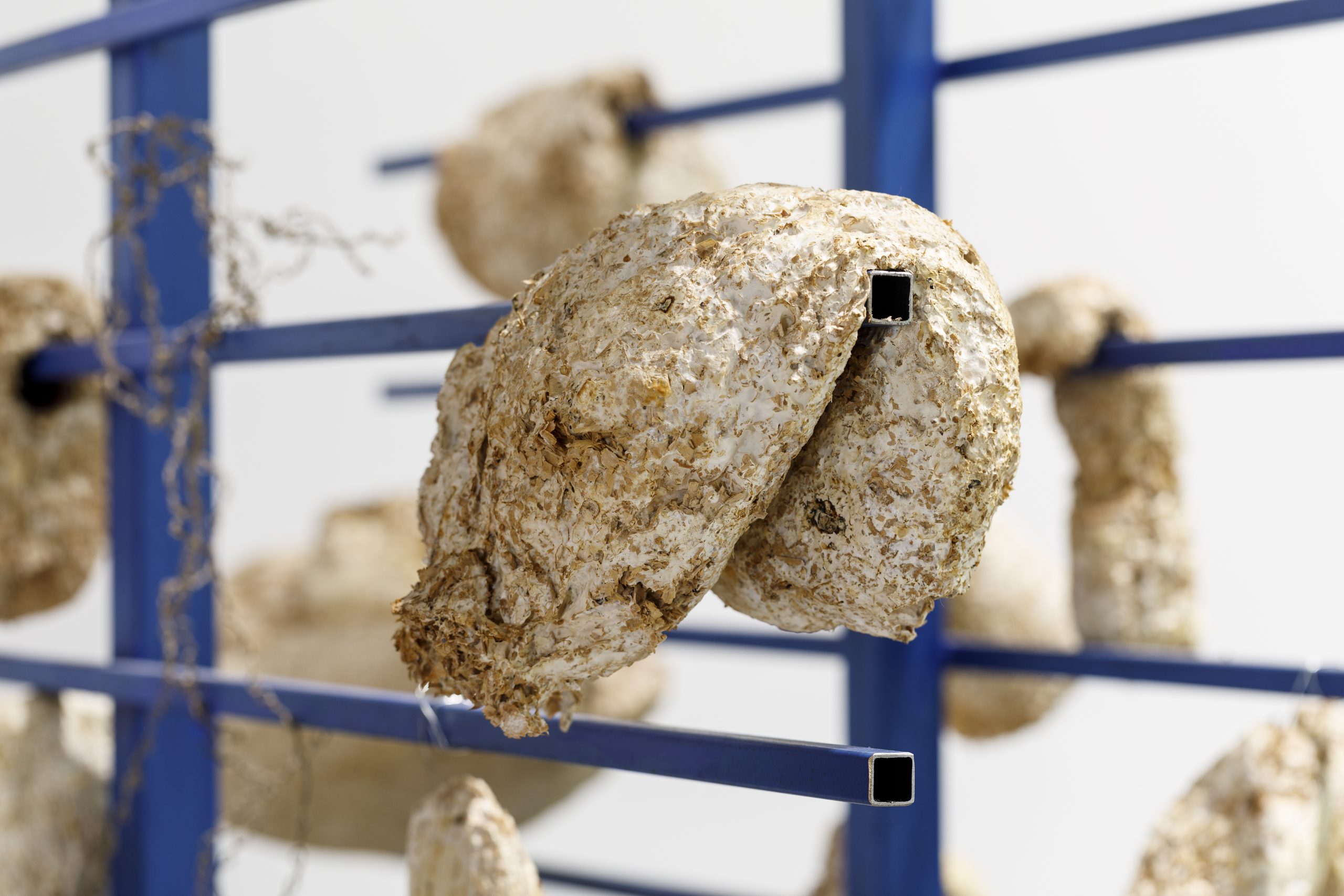 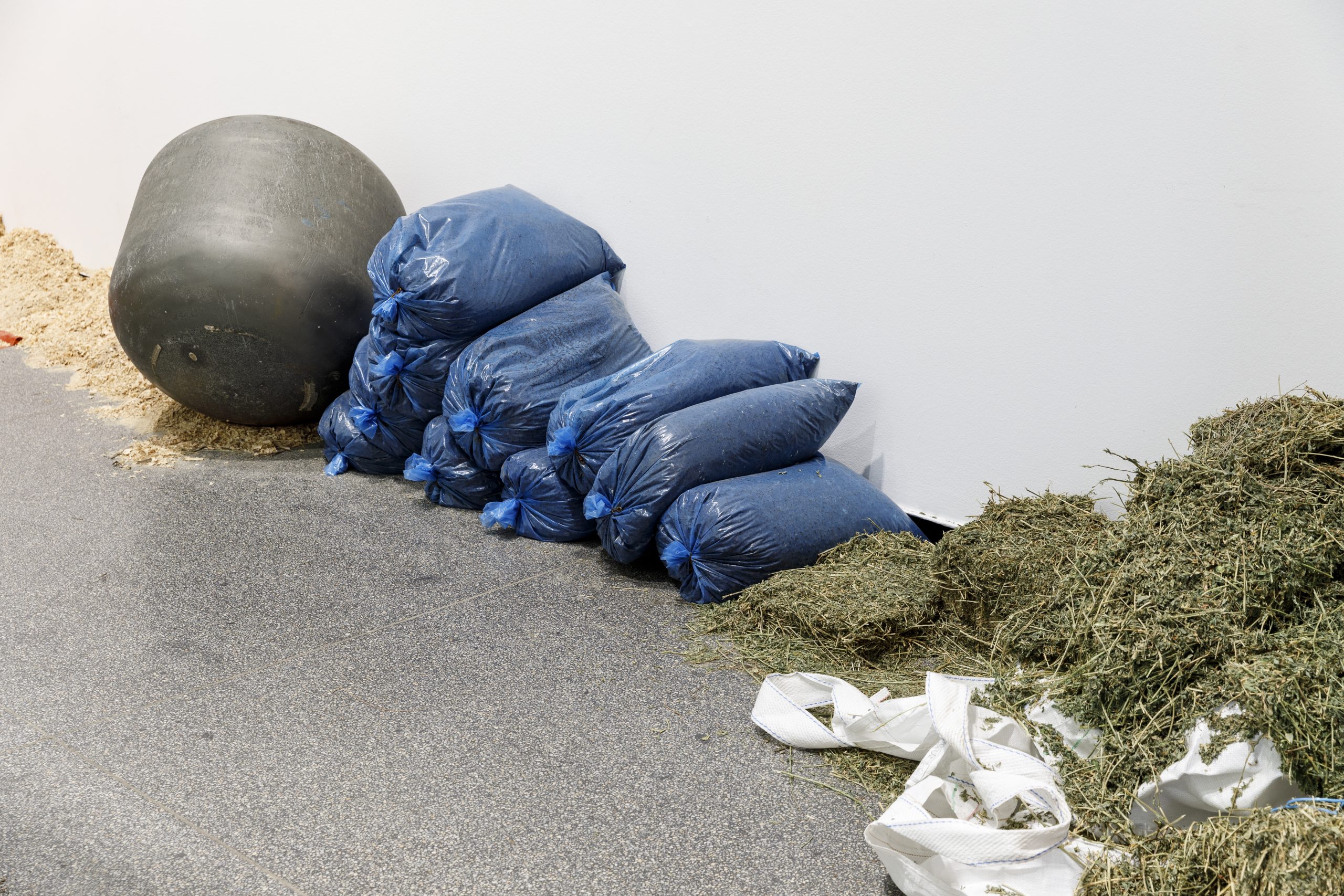 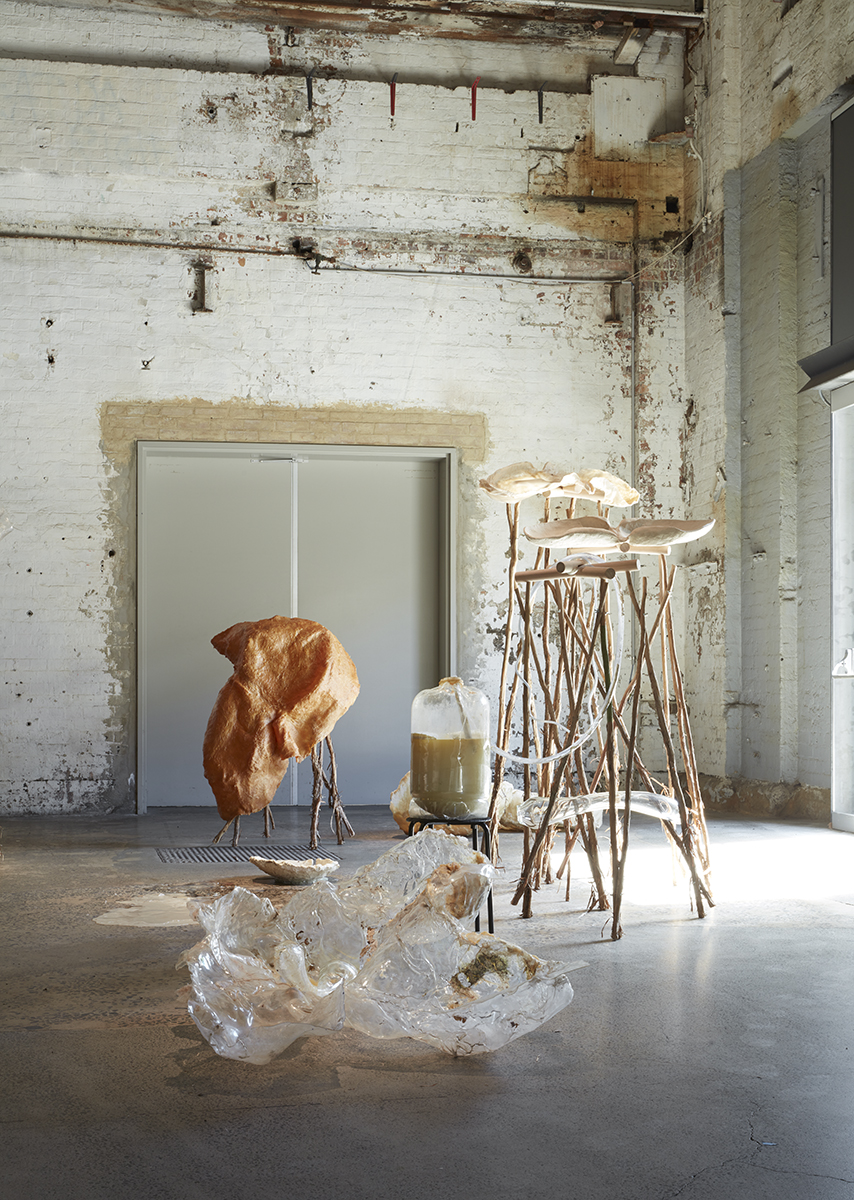