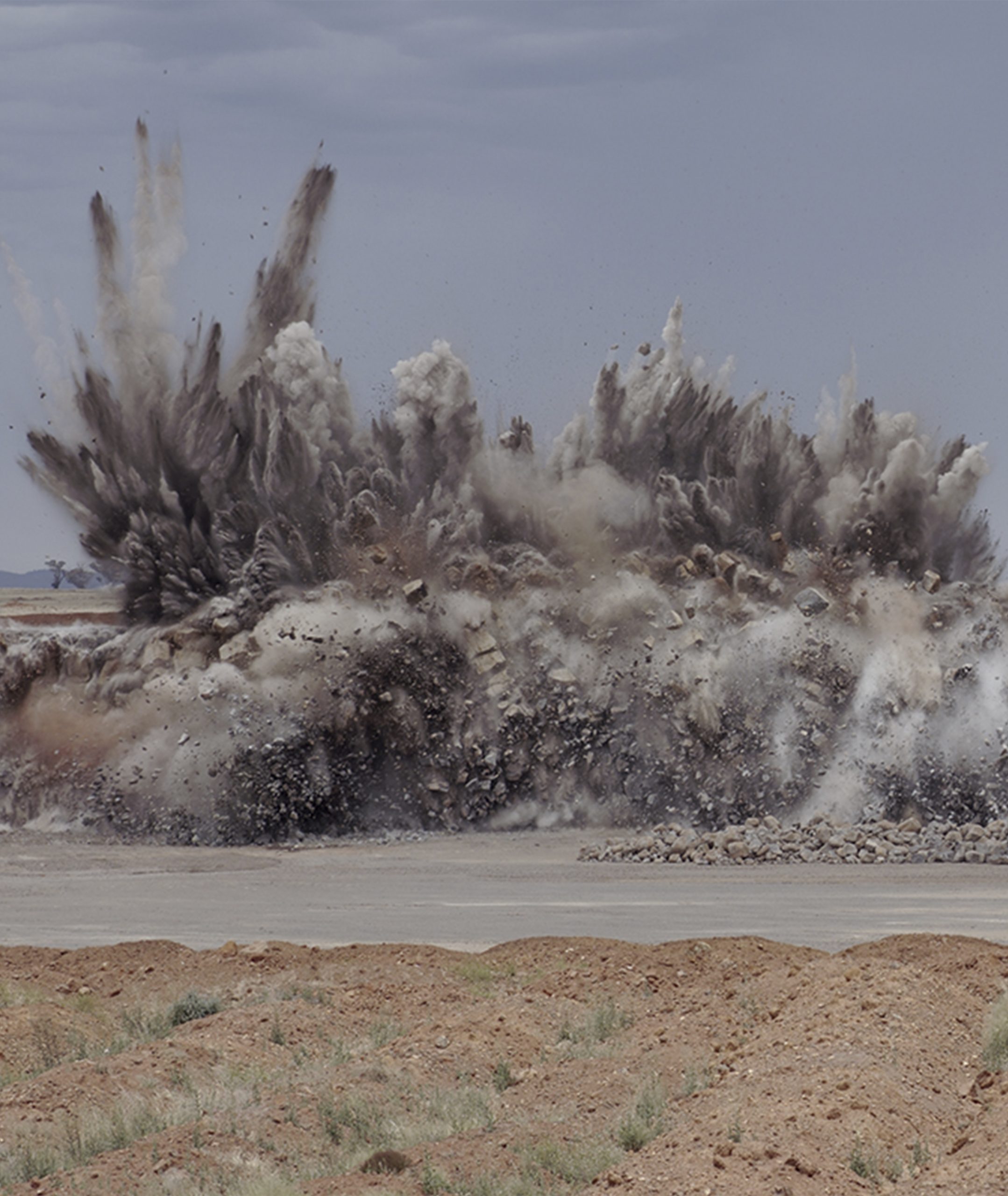 A still from Memory-work ii  (2019) by Georgia Nowak and Eugene Perepletchikov captures the paradoxes inherent in their practice, and its translation through the mediums of film and space. The violence of an explosion, frozen dramatically in time, tears apart the ground, revealing an ancient underbelly formed over millions of years through layers and layers of sediment compressed tightly upon itself. The ossified moment pairs the slowness of geological time with the accelerated heartbeat of film and, more specifically, the instance of late capitalism.

This upheaval of the ground also unearths a number of the themes that lie beneath the artists’ practice in regard to time, materiality, extraction and residue. As they write in their description of the work: “time accelerates and land begins to shimmer with motion, it’s rhythms and ruptures animated by networks of energy flows.” There is a concern for narrative throughout the work, as the backstory of material elements are retold in conversation – through their own polished and desensitised surfaces, through the exploded geological surface left behind, and its scars. This tremor permeates all of the work that results from the collaborative practice shared by Nowak and Perepletchikov, oscillating back and forth between the temporal modes of film and photography and the spatial concerns of architecture, but at a scale which is global, and galactic.

In Memory-work (2019), the violence of this moment of inherent destruction is astutely paired with the delicacy of the mined product: basalt. A central element in the historical evolution of Melbourne and Victoria, the prevalence of this precious stone in the urban landscape is truncated from the enormous energy and space required for its extraction and commodification. The installation accompanying Memory-work keeps this disjunction in play, pairing these two extreme states. The presence of the raw basalt, umbilically entwined with explosives, implies the inherent stability of the material, and the cathartic instability of its removal.

All of the work created by Nowak and Perepletchikov has a heartbeat, a pulse that narrates space with a sense of foreboding. There is a translation of the geological landscape within the biological body, which makes the violence of their work so confronting. The existentialist Jean Paul Sartre wrote in Being and Nothingness: An Essay on Phenomenological Ontology (1943): “My body is everywhere, the bomb that destroys my house, also damages my body, insofar as the house was already an indication of my body.” Here, he refers to the inability to imagine your own interior, only being able to conceptualise it through the observation of another. The same is true of geological space, and the vast infrastructures that have been assembled to tame it. We can’t imagine the interior of the earth, but the explosion forces us to acknowledge it. The sectioning of the body, and the explosive tearing of the ground through extraction, have a similar existential pose and gravity in Nowak and Pereplitchikov’s work. It evokes the same empathetic connection to the landscapes involved.

These concerns for the economic, biological and geological come through in the essay film Aurum (2020), which documents the social and physical history of gold as both material and philosophical proposition. The film opens with the historical influence of gold in shaping thousands of years of human existence, as well as its much deeper planetary antecedent formed by dead stars arbitrarily colliding in space. This collision between the geological and the anthropocentric is rhythmically played out in a slowly evolving narrative where the biography of the material is paired with gliding aerial shots of geological landscapes, allowing the two modes to intersect with each other. The dexterity of the collaborative practice comes out in this work, the concern and sensitivity towards the human landscape juxtaposed with the altered physical landscape of mining. The work documents a kind of alternative nature that is left behind, where “mountain landscapes emerge in negative” through a violent archaeology of industrialisation which has shaped the economic and spatial conditions of the global capitalist environment.

These themes are delicately layered into all aspects of Nowak and Perepletchikov’s practice. The process of their collaboration is initially framed by research and the deep investigation of a concept and historical or theoretical framework, which is then interrogated and reprocessed through film, photography or physical artefact. The pair have a deep concern for the spatial, from the human scale of the gallery to the vast infrastructures of extraction that they document. The presence of the site, as a source of both material and memory, is persistent throughout their work, and inescapable from its translation.

The vast scale of these questions is represented most cogently in the smallest, most tangible relic of their process: a minted collectible gold coin that is offered for exchange and contemplation. The coin is inscribed with a unique contact address linked to a virtual NFT marketplace, where an edition of Aurum has been minted. This displacement between the personal encounter with the material and its abstract physical and spatial footprints perfectly embodies the collaborative dialogue of the work, the interconnected tangible and intangible scales of material extraction. If Memory-work ii captures a philosophical explosion in physical space, then the minted gold coin – linked as it is to an entwined labyrinth of crypto-currency and data entanglement – captures the same explosive encounter in human space, narrating the shifting values of memory, economy and place that our bodies are constantly renegotiating.

Originally published in Union 01. For more about the artists subscribe to Union magazine. 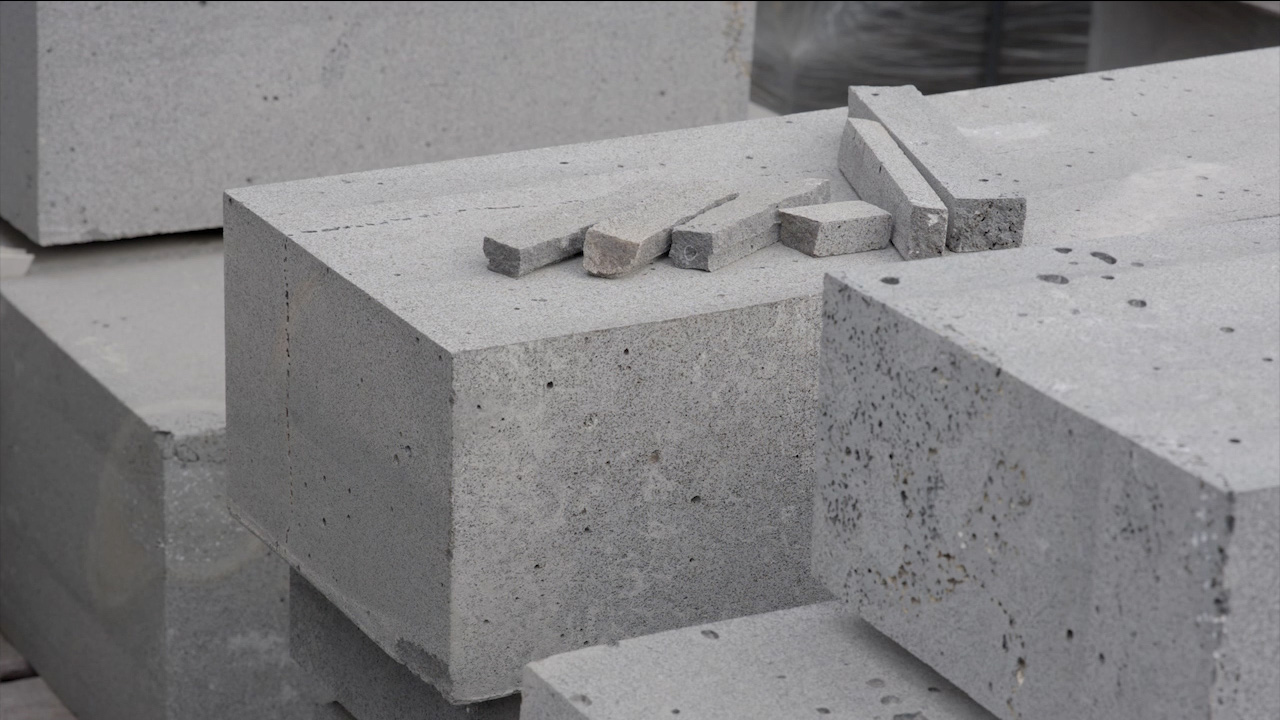 “All of the work created by Nowak and Perepletchikov has a heartbeat, a pulse that narrates space with a sense of foreboding. There is a translation of the geological landscape within the biological body, which makes the violence of their work so confronting.” 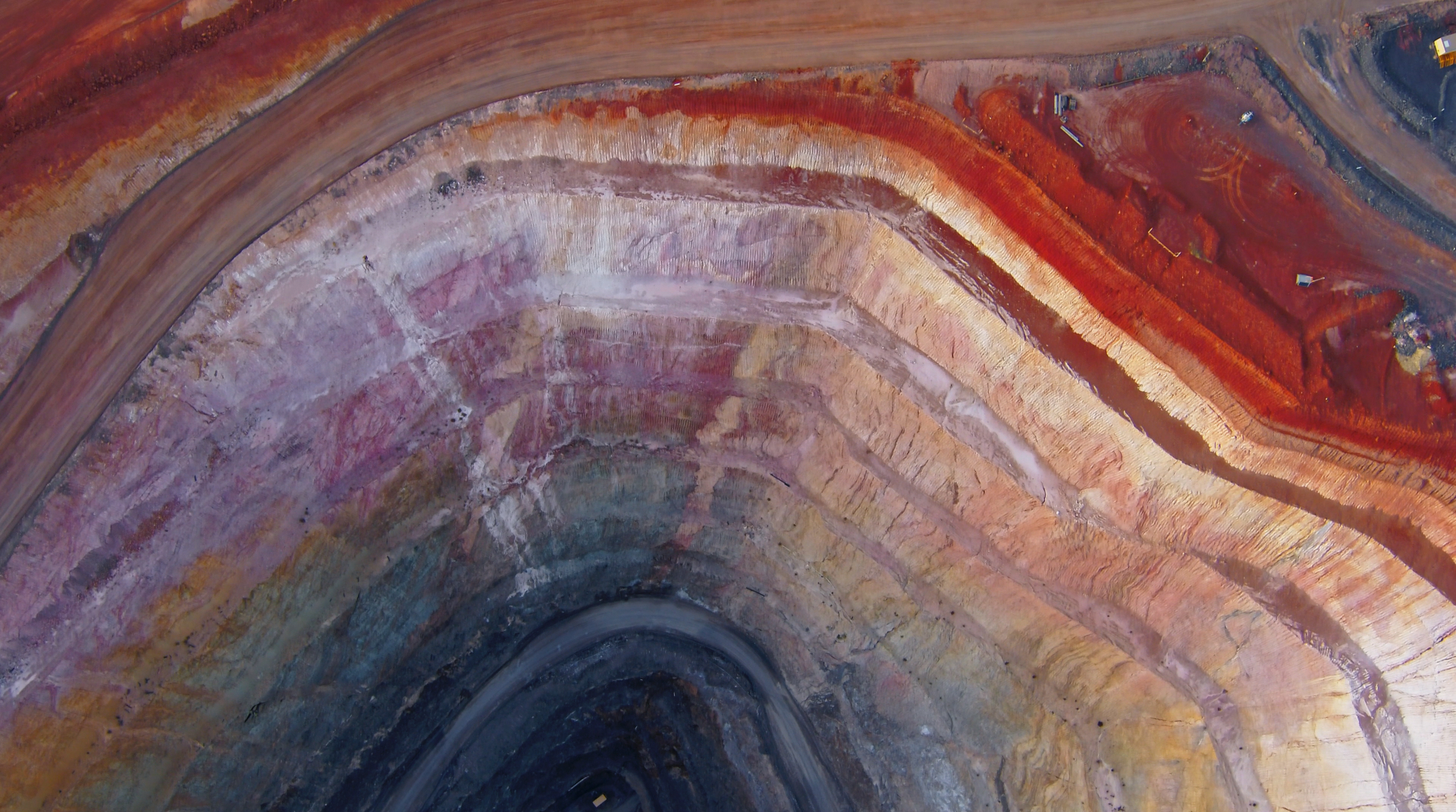 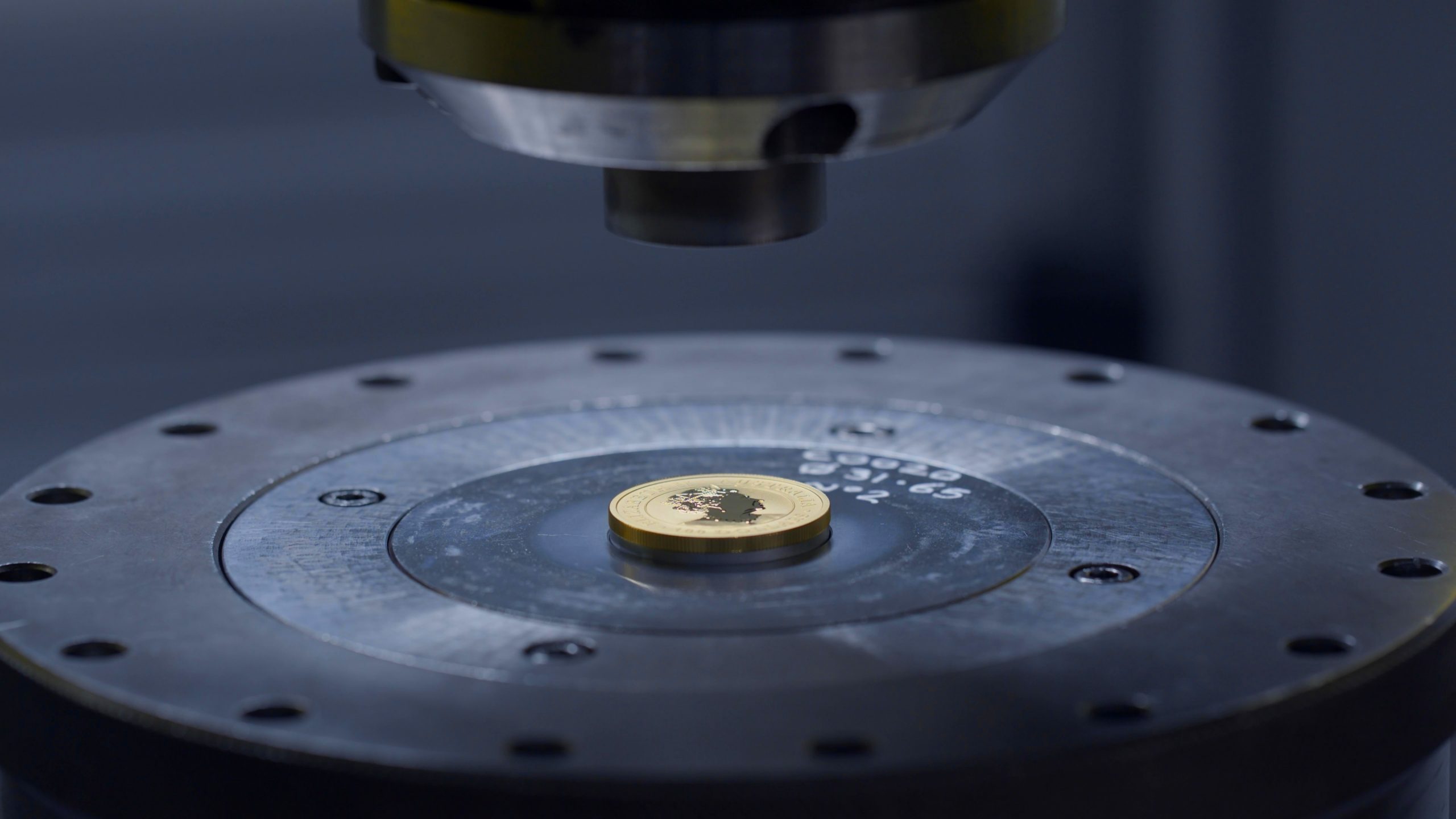 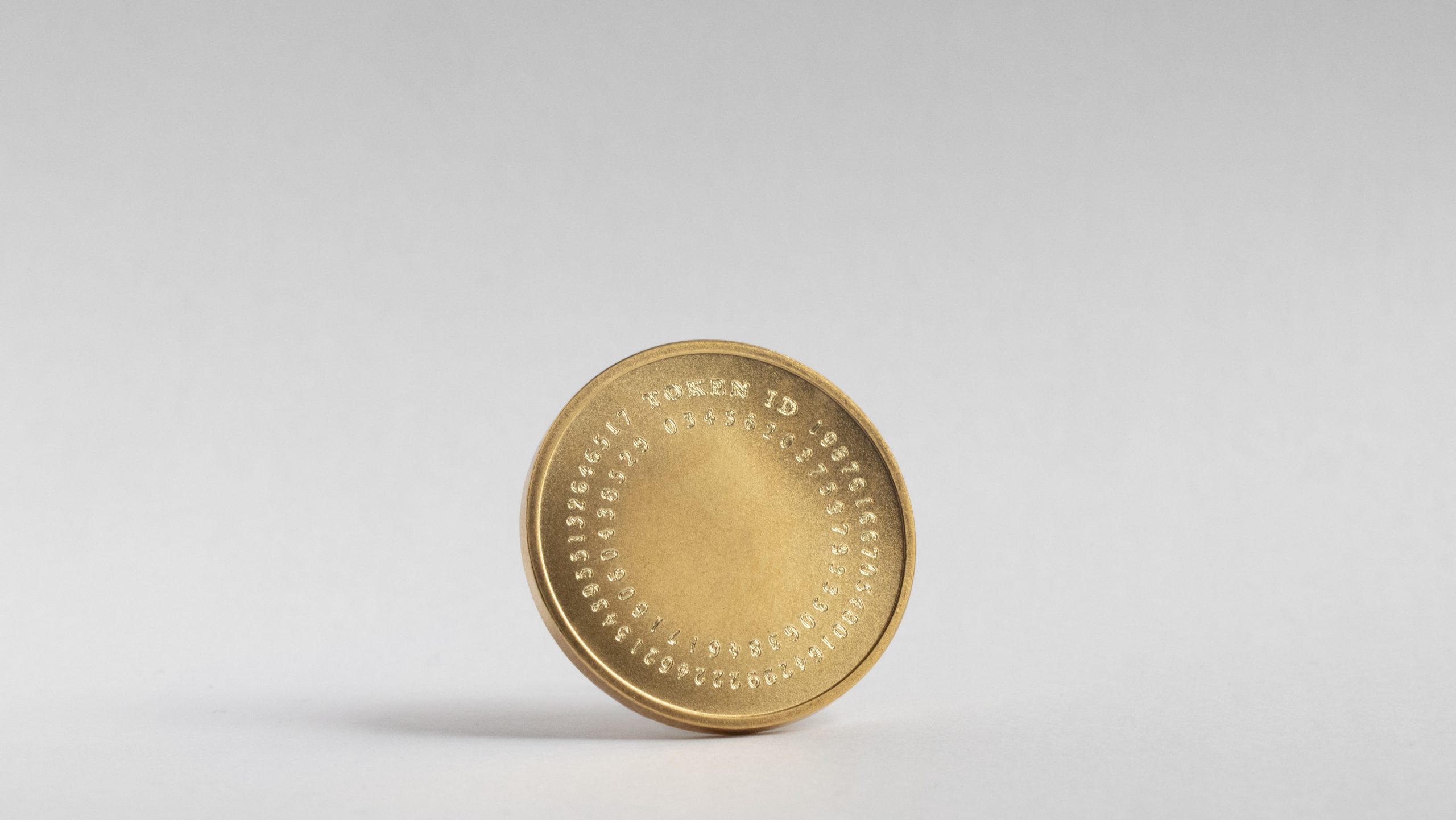